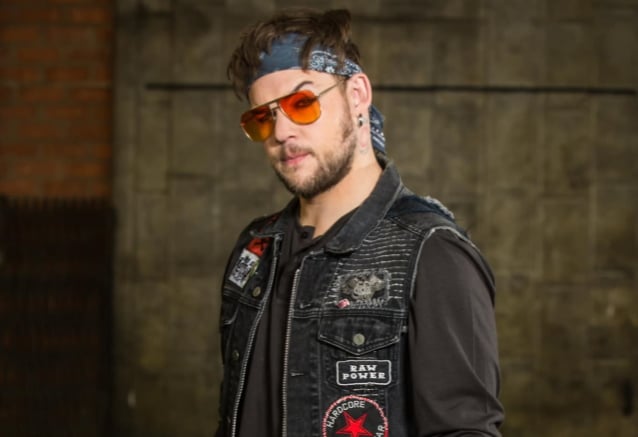 James Durbin likely wasn't done any favors upon joining QUIET RIOT in 2017 when drummer Frankie Banali's wife uttered the "He is also 28 and HOT. Am I right, ladies?" line that got plenty of mileage in the BLABBERMOUTH.NET comments section. Known as the "metal guy" from his run during the tenth season of "American Idol", Durbin stepped into QUIET RIOT with a head full of ideas and the pipes to match. His stint with QUIET RIOT got off to a rocky start when he had to re-record Seann Nicols's vocals on 2017's "Road Rage". From there, Durbin never quite seemed like the right fit — no matter his vocal prowess and energetic stage persona. The vocalist left QUIET RIOT in September 2019, two months before his final studio album with the band, "Hollywood Cowboys", was released.

Durbin has since fared much better. Starting with last year's strong, pure-metal foray "The Beast Awakens", the singer proved capable of writing and performing his own material. His latest venture is CLEANBREAK, another in a long line of Frontiers Music Srl-created projects that brings together veteran hard rock and metal musicians. Paired with RIOT guitarist Mike Flyntz and the STRYPER pair of Perry Richardson (bass) and Robert Sweet (drums),their "Coming Home" debut keeps Durbin firmly planted in classic metal. But in a recent chat with BLABBERMOUTH.NET, Durbin sounds ready to try just about anything: just don't ask him to front another 1980s metal band.

Blabbermouth: What are you now? Are you a solo guy? Or are you going to be doing "bands" more frequently?

James: "I don't really know. [Laughs] To be honest with you, I'm going with the flow. Professionally, everything I'm doing is with Frontiers. What I wanted to do after QUIET RIOT, which is kind of where I wasn't completely satisfied creatively, is that I really wanted to be creative and challenge myself. I wanted that outlet. I put out a record when I was with QUIET RIOT, 'Homeland', which is where I was at the time creatively and emotionally. I thought that was the best way to write the songs and showcase them as clean, Americana storytelling. After that, it was like, 'Okay. I'm going to get my singer/songwriter shit out of the way. I was singing about it every fucking night: I want to bang my head. If I was a metal band, what would I sound like? What I was going to do was write an album with other people. Then I'd go, 'I'm not a metal songwriter or a riff writer. How can I do this on my own?' I was trying to line up sessions and then the pandemic hit. So, I kinda had no choice and I became a riff-writer, which was fun. I really challenged myself songwriting-wise. After the DURBIN 'The Beast Awakens' album and into CLEANBREAK, this new chapter has really been defined by the age in which we're living in and the pandemic in which we've been experiencing. It really hasn't given me an opportunity to tour it. The album was released right in February or March of 2021. People were just starting to go out, the bigger bands. I'm also at the point where the most important thing to me is seeing my kids and watching them grow and being with my wife. I'm not super gung-ho to go on tour. Let me rephrase: I would absolutely love to go on tour. I would love to. If there was a tour booked and everything was in place and all I had to was get there and sing, that'd be amazing. It's not that easy. I opened myself to the universe and allowed opportunities to come to me. I put out a general idea of what I would like and worked towards that while letting things come to me. I haven't stopped working. I've been the busiest I've been playing pickup shows with other people; 'sideman' stuff, as I like to call it, and production and all sorts of things. To be able to make kick-ass records that I enjoy and 'The Beast Awakens' and the new CLEANBREAK record and beyond — I'm working on the follow-up to the "The Beast Awaken" now. I get so much enjoyment out of that."

Blabbermouth: How much trust do you place in Frontiers? For them to assemble a band and find songwriters for you is a pretty big deal.

James: "Whenever I use the term 'career,' I use it very loosely and in quotations because I just sing. My whole philosophy from day one on 'Idol' is that I want to be a working musician to support myself and my family. I don't take it too seriously. If you look at my record catalog of albums that I've done, 'Memories Of A Beautiful Disaster' came out in 2011. That was straightforward, radio-rock at the time, crossover, all of that — as heavy as 'Idol' would let me. 'Celebrate' came after in 2014. I went and wrote a killer rock radio rock record. The label didn't want it. They wanted to pull the 'Rock Of Ages' thing, like the stage show and take the metal kid and turn him pop. I looked at the numbers and was like, 'Okay, if I write 70% of the record or I am credited with 70%, they'll pay me a lot more.' I looked at the finances to support myself and my family. It's a business. It's the music business, unfortunately, at times. After that, I was independent, I did 'Ride On Sunset', which I was into it and that's where I was musically. Not long after that, I joined QUIET RIOT and did two studio albums and one live album with them, and 'Homeland' in the middle.

"Working with Frontiers, I don't know how it is for other people. It's probably similar to 'American Idol'. Everybody has a different experience. I've heard people bash them. I've heard all sorts of stuff, but I can only speak to my own experiences. They've been so easy-going, not at all what anybody warned me about. Maybe it's because I'm easy-going. We had our first initial meetings in December 2019 over the phone and email. Because the records I did with QUIET RIOT were on Frontiers, they already knew what I could do, to an extent, and believed there was more there. It's nice being on a label again. It's nice being on a label that with the DURBIN album, I did everything. I wrote the entire album myself. There were no throwaway songs. I wrote each song intentionally for the album and they gave me the approval to do so."

Blabbermouth: Has it been easier now for you to be out of QUIET RIOT? It always seemed like something was going on in that camp.

James: "What I found, for me, for being the guy with his name on the marquee — whatever that's worth. If it's worth 25 tickets in Akron, who knows? Just being in charge, I think that's what it was. It's not so much that I need control, but I'm an ideas guy. I like to have ideas implemented. It's funny. I'd go into it, but I don't want to. It's just things you talk about that are not brought about until you're not there. And you see the things you talked about and it's like, 'Oh, alright. Cool.'"

Blabbermouth: So were these things you were not consulted about and then done after the fact?

James: "No, not that. The simplest way to put it is we played 'Metal Health' in its entirety every night. QUIET RIOT has for the last 40 years. There's not a single show where they didn't play 'Metal Health' in its entirety. It's like, 'Why aren't we making a deal about this? Why isn't this the thing we're leading with our first foot? Like, playing 'Metal Health' in its entirety.' I also wanted to get the mask. I have the mask from Trick Or Treat Studios. It turns out the mask I was looking at, the officially licensed QUIET RIOT 'Metal Health' mask, the company that makes them is based here in Santa Cruz, California, right next to my middle school. Super fucking random. I went to the warehouse and got one from the owner, Chris Zephro. But I always wanted to have the mask, have a red straitjacket and we could have done a radio raffle thing or something, work with a local radio station and do a contest where a QUIET RIOT superfan can wheel out the singer on a dollie. That sort of thing. Wheel me out in the straitjacket and the mask and do that to start the show. A spectacle. Do something. I was trying to put my mind where Kevin DuBrow's mind would be. He would do theatrics. I wouldn't put it past him. Just stuff like that. Little things. Really little things. The good times were incredible; they really were. I look back on that with so much enjoyment. It was really great to work with those guys at that time. It was really something. There are some things I never imagined, places I never imagined I'd be this early on. I'm super grateful for those. I'm so stoked they're still playing. I don't live in an area where these bands frequent. They go to L.A. or Sacramento and sometimes San Jose. Being down here in Santa Cruz is just out of reach, but whenever they're in the area. I'm definitely going to see them."

Blabbermouth: Would you hop up onstage and sing?

James: "Maybe not. I was watching some old QUIET RIOT footage with Kevin. I sang these songs every night, many of which I can't remember. I don't have the lyric retention on some of those I was singing every night, which is funny. But, yeah, I'm super-stoked with them. They are dudes I spent so much time with who are still working and making music. And that's the dream, whether it's the original guys in the band or not. A job's a job and gig is a gig."

Blabbermouth: Was it more a pressurized situation than you would have liked because all the singers who came before you couldn't fill Kevin's position?

James: "No, because you can never fill Kevin's position. It goes for anybody. That was his band. That was his idea of what it was when it found success. That was his vision. So, no, I could never have imagined anybody, let alone little old me filling his shoes. I was happy to be there. I was born in '89, so I didn't grow up on them when things were happening for them. I definitely still grew up with 'Metal Health' and the idea of Kevin, this lanky, crazy metalhead that is a flamboyant wildman. I striped my mic-stand from the age of 16 because of Kevin. I got to perform with my striped mic-stand when I was 16. I still have it and got to perform with it in QUIET RIOT, so that's super crazy. We played a lot of shows with a lot of guys. It's definitely cool to see people still working and still going.

"One thing I wish, although ZP Theart, the previous singer of SKID ROW, was great in the position. Great voice, great presence, great guy backstage and everything, one of the big reasons for me waving the flag for metal on "American Idol" was because of what Erik Grönwall had done the previous year on "Swedish Idol" performing SKID ROW and IRON MAIDEN. That was a big reason for doing all that. Now, he's the new singer for SKID ROW and I see no end for that. I've never gotten a chance to meet him. That's the only thing that I wish if I could turn back in time and get on a show with them. That would be bitching." 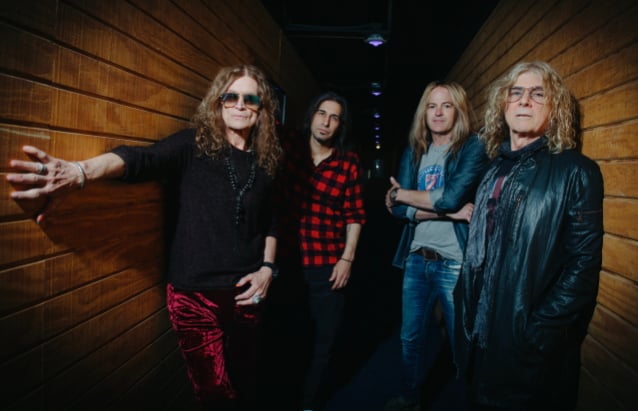 From DIO, COVERDALE To HUGHES, THE DEAD DAISIES' DOUG ALDRICH 'Has No Agenda' When Working With Legendary Vocalists 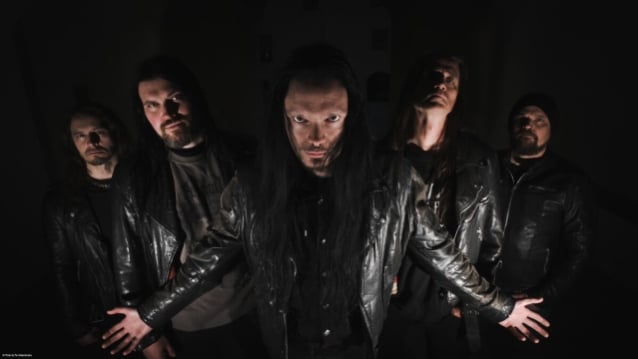 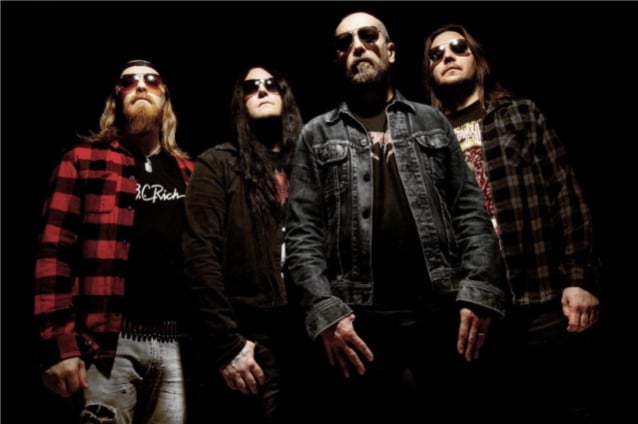