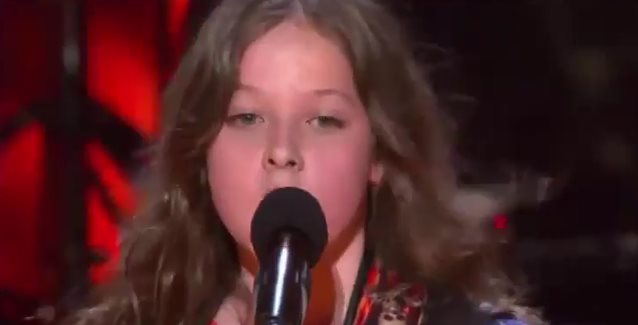 Young Australian heavy metal fan Callum McPhie performed the song "Through The Fire And Flames" by DRAGONFORCE at the grand final of the reality television talent show "Australia's Got Talent".

According to The Canberra Times, the 10-year-old Canberra schoolboy played guitar and sang on a stage emblazoned by real flames.

"They say it's the hardest song to play on Guitar Hero and that you should just actually learn guitar instead," his dad Doug said.

"It takes two of the top fastest metal players in the world and a singer to perform what Callum tackled himself."

Ozzy Osbourne's daughter Kelly Osbourne, who is one of the judges on the program, was full of praise for Callum's performance.

"Callum, you are such a rare breed of human being....You are born a rock star and I'm just so proud of you," she said.

Despite the accolades, Callum failed to attract enough votes to make it through to the top five and stay in the running to take home the $250,000 first prize on Monday's "decider."

Earlier in the competition, McPhie performed Ozzy Osbourne's hit song "Crazy Train" in front of Kelly. She later confirmed that she got her father to check out Callum's vesion. She said: "I showed my dad and he was in shock and he couldn't believe it."

McPhie's reaction was predictably enthusiastic. "I can't believe that, when I first learnt this song, one of the first songs I ever learnt, I never expected that Ozzy Osbourne might hear it. Wow."

The fast-tracked high school student recently told Fairfax Media he wanted to be an astrophysicist as well as a musician.