According to The St. Petersburg Times, 18 CANNIBAL CORPSE fans were arrested in St. Petersburg, Russia on Sunday as they were protesting against the last-minute cancelation of the band's concert at the Kosmonavt music club.

The event organizer claimed the show was called off due to "technical reasons," but the fans believed it was related to complaints by Dmitry Tsorionov, the head of "God's Will," a Russian Orthodox social movement, about CANNIBAL CORPSE's lyrics, which Tsorionov claims violate Russia's anti-blasphemy law.

CANNIBAL CORPSE's tour of Russia kicked off on October 2 in Krasnodar and was scheduled to include eight concerts. However, only four shows went ahead as planned, with the band's October 5 gig in Ufa getting axed when the venue abruptly closed "for technical reasons." CANNIBAL CORPSE's October 10 concert in Nizhny Novgorod was shut down by armed masked police officers 30 minutes after it had started. A number of fans were detained and taken for compulsory drug tests.

According to the police, the detained fans were charged either with "disorderly conduct" or with "being drunk in public," offenses that are punishable by fines or up to 15 days in prison.

CANNIBAL CORPSE has released the following statement regarding the issues the band entountered on the Russian tour:

"As you all are certainly aware by now, our concerts in Ufa, Moscow, and St. Petersburg were cancelled. We were present in these cities and ready to perform each of these shows but were not permitted to. In Ufa the power was turned off shortly before the show (we were told because the venue was late on rent),and in Moscow and St. Petersburg we were told that we did not have the correct visas and that if we attempted to perform the concert would be stopped by police and we would be detained and deported (prior to the tour we had been told that we did have the correct visas and that all of our paperwork was in order).

"Our show in Nizhny Novgorod also had problems. In that city we performed half of our set before being stopped by police. We were told the police needed to search the venue for drugs and that the show had to be terminated.

"These are the reasons for the cancellations as far as we have been told.

"On the brighter side, we had a fantastic time performing in Krasnodar, Samara, Chelyabinsk, and Yekaterinburg. We were able to play our full set in all four of those cities.

"We came to Russia excited and prepared to play all of the scheduled concerts, and we apologize that we were not able to do so. It was beyond our control. We are extremely disappointed. We have played in Russia many times and we love our Russian fans. Hopefully someday the situation for us in Russia will be different and we will be able to return."

A Russian TV report on CANNIBAL CORPSE St. Petersburg concert cancelation and protests can be seen below. 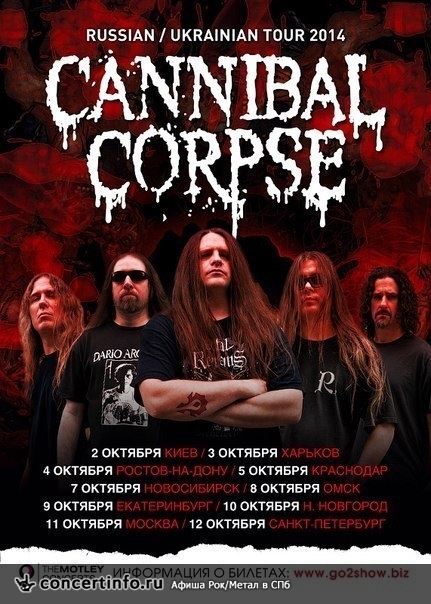