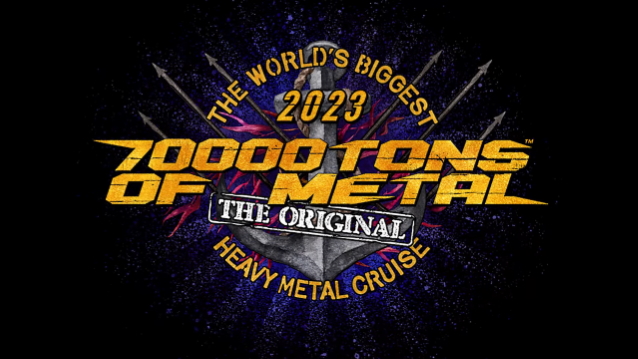 The 70000 Tons Of Metal cruise creator, Swiss concert promoter Andy Piller, confirmed that the event was back on track after being canceled in 2021 and 2022 due to the coronavirus pandemic.

"We've been working hard to secure a new ship, possibly even with a new destination, and with the best lineup that 70000 Tons Of Metal, the world's biggest heavy metal cruise, has ever seen," Piller said in a video message which was uploaded to social media on Friday (December 24).

The 70000 Tons Of Metal team added in a separate message: "We can't wait to reunite with our Global Heavy Metal Family in 2023 when we sail through the beautiful Caribbean once again.

"Thank you very much for your continued loyalty and undying support, it means the world to us."

70000 Tons Of Metal has been one of the more unique and/or ingenious ideas to infiltrate the live music scene in the last decade.

"You have to see it took me from the point I had that quite insane idea," Piller told FixionMedia.com in a 2014 interview. "It took me almost four years to get the ship in the water, so to speak. It was from the beginning that my thought was to make the ship as an annual event, given the fact it would work. When you start a new business, you never know if it will work or not. Isn't this what you're aiming for? Otherwise I wouldn't have put four years of my life into it. I wanted to establish it as an annual thing, and not spend four years of my life as a one-off."

Piller's extensive background in the European live industry gave him an up-close and personal look at the workings of the venerable open-air festivals that dominate the summer landscape. Seeing how successful these festivals are, coupled with a few drinks and some friends during a warm summer night at his apartment in Vancouver, helped spawn the idea for 70000 Tons.

"I have never organized big festivals," he noted. "I started as a local promoter in Europe, then switched to a touring role. Then I was working for a tour/production/road manager for 15 years, and that eventually brought me to Vancouver. It wasn't something far off. It's not like I'm a banker or dentist coming up with this. I totally had the idea and connections on how this could work, and I had been to most of the big European open-air festivals. That was the idea — just condense that and put it on a cruise ship.

"People thought I was nuts to have a metal fest on a cruise ship," he continued. "They thought it was nuts to have put 40 bands on there, and now we have 60. The idea is like, the average band has five musicians, and if you have 40 bands, that's 200 guests. It's a 1-to-10 ratio, and that actually created such a special atmosphere because there are so many musicians around. I'm sure it would have worked with less bands, but the question is, where's the breaking point? A lot of people are concerned we're going to make it bigger and lose the intimacy factor and so on. I think it won't, but just to keep the principles of the event the same, so okay, we add 1,000 people and we have to add 20 more bands. Now there are 3,000 guests and 60 bands."