According to Entertainment.ie, airport-style security checks will be in place when METALLICA performs at the iconic venue Slane Castle in Meath, Ireland on June 8. As with most concerts, bag searches will be carried out.

75,000 fans are expected to attend the concert, which will mark METALLICA's first appearance in Ireland since the band played in Belfast in 2010 and Dublin in 2009. The legendary heavy metal act was unable to play in the country during the indoor leg of the "WorldWired" tour last year because of the size of its stage show.

Ireland's largest music promoter MCD Productions has announced that the no alcohol is allowed to be brought in and items such as air horns, camping equipment, cameras with a detachable lens, tridents and lightsabers are prohibited on site. 450 Gardaí (Irish police) will be on duty to ensure the safety of those in attendance.

Supporting METALLICA at the show will be FANGCLUB, BOKASSA, STIFF LITTLE FINGERS and GHOST.

Slane Castle owner Lord Henry Mountcharles told Radio Nova: "We've been excited about METALLICA for some considerable length of time and Slane will always be at heart a rock 'n' roll venue and Slane will definitely rock on June 8th." 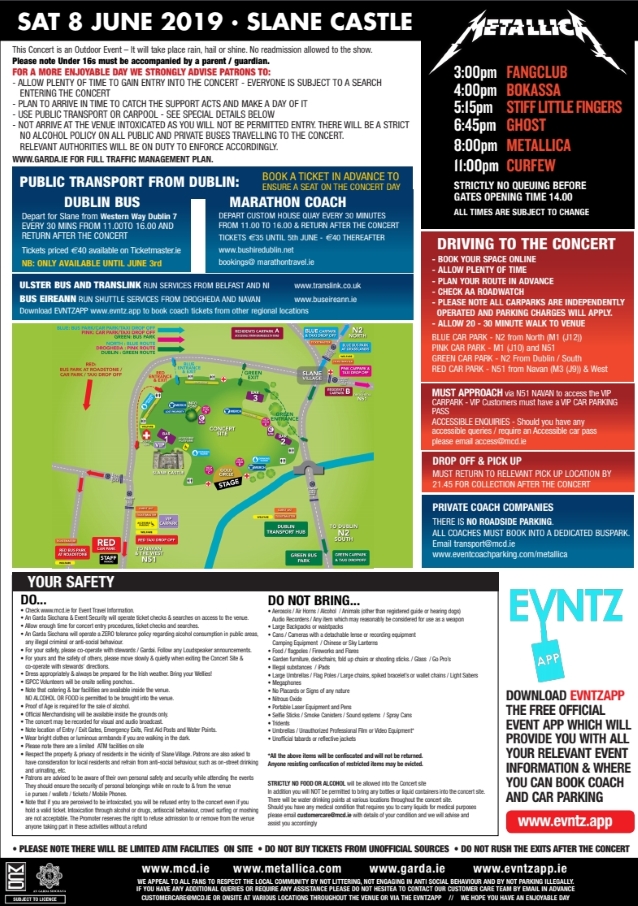