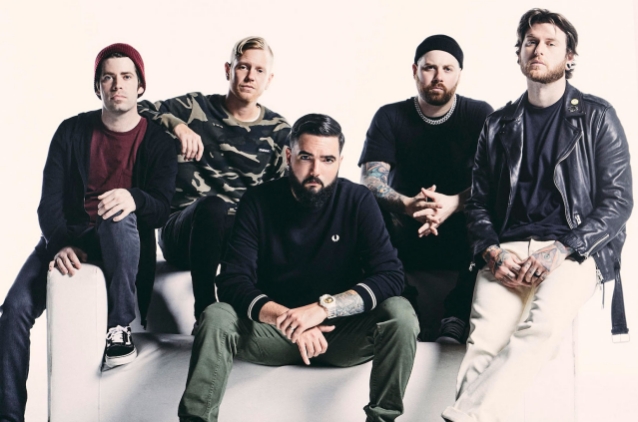 DJ Valentino of WSOU recently conducted an interview with A DAY TO REMEMBER guitarist Kevin Skaff. You can now listen to the chat using the SoundCloud player below. A couple of excerpts follow (transcribed by BLABBERMOUTH.NET).

On the delay in releasing A DAY TO REMEMBER's new album, "You're Welcome", which was originally expected in November:

Kevin: "It got pushed back because the art for the record isn't done yet. We still can't find a good cover for the record. I know it doesn't really matter nowadays, with streaming and everything, but we just everything to be perfect before it comes out. And there are still a couple of songs that are still getting mixed that we just need to find the right mixer. It's only getting pushed back — what? — two [or] two and a half months, so it's not too bad. It's not like a Kanye [West] thing where it's never gonna come out."

On the musical direction of "You're Welcome":

Kevin: "It's a longer album. There's gonna be a bunch of songs on it… I think there's a little something for everybody on it."

On the inspiration for the more positive lyrical themes covered on "You're Welcome":

Kevin: "I think just getting older and just being comfortable with ourselves. Our lawsuit's [with Victory Records] over. I think we're all just in a good clear headspace. Everyone's married — except me. If I was writing the songs, it would have been a lot more depressing. [Laughs]"

On A DAY TO REMEMBER's recent decision to sign with Fueled By Ramen — marking the band's first move back to a label since leaving Victory Records nearly 10 years ago:

Kevin: "It was cool, man. It was time for us. We were actually at liberty, legally, to sign with somebody else. And everyone at Fueled has been our friends for years — we've known a lot of them for a long time — and it just felt super comfortable and super easy just to transition the train into Fueled By Ramen. And they've been nothing but great to us literally ever since we got there. I know we just started, but it's been awesome."

Last week, A DAY TO REMEMBER unleashed its brand new single, "Resentment". The band also shared an official music video for the song, directed by Jeb Hardwick. Watch it below.

"Resentment" follows "You're Welcome"'s lead single, "Degenerates", which was released in August ahead of A DAY TO REMEMBER's main-stage performances at the U.K.'s Reading and Leeds festivals. Prior to the release of "Degenerates", A DAY TO REMEMBER surprised fans when the band was featured on Marshmello's single "Rescue Me", marking the group's first new music since 2016's acclaimed "Bad Vibrations".

A DAY TO REMEMBER will return to the road next month for a run of shows in Australia. The band was also just announced on the 2020 lineups for Lollapalooza Argentina, Lollapalooza Chile and Lollapalooza Brazil, and is expected to tour extensively throughout next year.