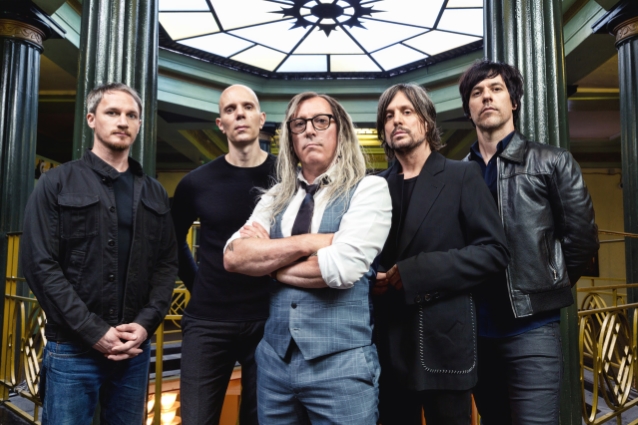 A PERFECT CIRCLE Releases Gleefully Apocalyptic Video For 'So Long, And Thanks For All The Fish'

A PERFECT CIRCLE has released a gleefully apocalyptic video for "So Long, And Thanks For All The Fish" as the Billy Howerdel- and Maynard James Keenan-led outfit continues its U.S. tour, performing tomorrow at Detroit's Masonic Temple Theatre.

"Welcome to the new normal," said Keenan of the Kyle Cogan-directed clip.

A PERFECT CIRCLE's current trek kicked off with an intimate Grammy Museum performance to 200 lucky fans. The evening was a rarity for A PERFECT CIRCLE who just this week performed at Madison Square Garden and whose most recent hometown show was a sold-out outing at the venerable Hollywood Bowl.

Steven Sebring ("Horses: Patti Smith And Her Band", "Dream Of Life") directed a companion film to "Eat The Elephant". Viewable via a custom prism, the hologram film is a first-of-its-kind offering and can be found in the "Eat The Elephant" deluxe box set. Several clips from the film have been released in 2D versions, including the video for the album's title track.

A PERFECT CIRCLE also recently announced its participation in Record Store Day’s Black Friday festivities, offering a limited-edition seven-inch single featuring "So Long, And Thanks For All The Fish" with a B-side of the AC/DC cover "Dog Eat Dog".