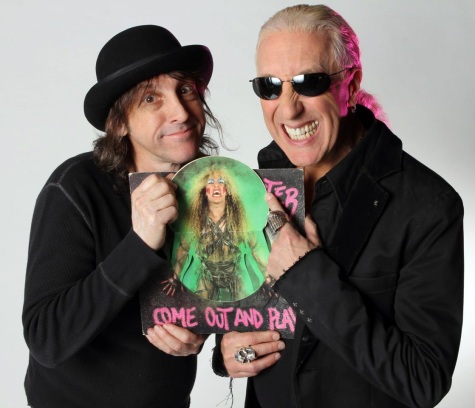 A Piece Of TWISTED SISTER's History Rolls Into Grammy Museum

You always remember your first! For photographer Mark "Weissguy" Weiss, the first album cover he shot just happened to be TWISTED SISTER's historic, multi-platinum "Stay Hungry". The 1984 album brought us the two rock anthems "We're Not Gonna Take It" and "I Wanna Rock", which will be performed by the BLACK VEIL BRIDES at the Revolver Golden Gods awards on April 11.

How do you top the shockingly memorable image of Dee Snider, screaming and crouching with a rotting giant bone in his clutches? When Weiss was asked to create and photograph TWISTED SISTER's follow-up album, "Come Out And Play", it was a no-holds-barred art director's dream. Weiss concocted a textured manhole cover design that opened to reveal a novel "pop-up" mummy-wrapped Dee Snider resplendent with sharpened teeth, emerging from beneath the pavement.

In September of 1985, a 1,000 pound manhole cover was custom-made with the TWISTED SISTER "TS" logo by Weiss' dad, who also supplied a fully constructed street in Weiss' New York City studio, for Dee to emerge from. After the shoot both items remained in his New Jersey garage for 27 years, until April 1, 2012, when the manhole cover was loaded onto an 18 wheeler for the cross-country trek to its ultimate destination of honor at the Golden Gods: History Of Heavy Metal exhibit at the Grammy Museum in Los Angeles, California beginning April 11, 2012.

The truly heavy piece of metal history arrived last week to be displayed along with other heavy metal artifacts, including several of Weiss' iconic photographs from the era. These photographs are taken from Mark Weiss' extensive collection of rock's most enduring images from the "Decade of Decadence."

Mark Weiss' collaboration and history with the iconic rockers he worked with almost three decades ago comes full circle this year, with the recent completion of Dee Snider's release "Dee Does Broadway", as well as rocker Lita Ford's new CD, "Living Like A Runaway", both photographed and art directed by Weiss. Working with two of rock's legendary performers again, Weiss says, "I have always been there for the artists who were there for me when I began my career. We've all had and continue to have, peaks and valleys to overcome in our personal and professional lives. Without their loyalty and belief in my craft, I would have never been able to continue making my rock 'n' roll dreams a reality."