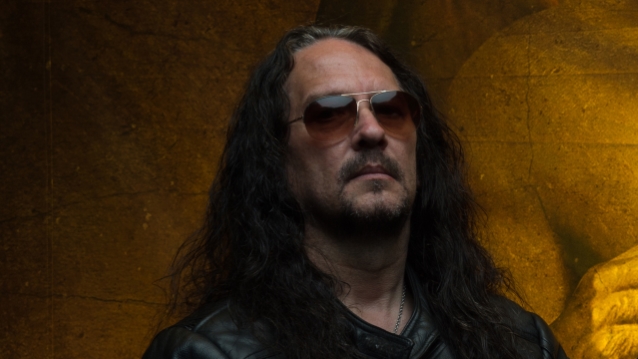 ABADDON Says He Has No Idea Why He Was Fired From VENOM INC.

On whether he was surprised of VENOM's success in the early 1980s:

Abaddon: "When you're in something like that, you don't think of it as being huge or being unusual. The first gig in England was Hammersmith Odeon and we did two nights. That was unusual, Eric [Cook], our manager, rang up, he was green as grass, he rang up this agent and said 'I've got this band and I'd like you to be this band's agent.' He goes, 'Great, what are they called?' 'They're called VENOM.' He said, 'Okay, if you ever play in London...' 'We're playing in June or July.' The guy said 'Oh, really, where are you playing?' He said 'Hammersmith Odeon.' He said, 'What, who are you supporting?' He said 'We're not supporting, we're headlining.' The guy was like, 'Hang on! Hang on! Hang on!' The phone went dead, the guy goes away and comes back and says, 'Jesus Christ, you are!' Eric said, 'Yeah, we just started the second night.' It was because the first one sold out. The first proper gig we did was in Belgium, it was a festival with two or three thousand people. Then we went to America, the second proper gig we played was in America and that was with METALLICA supporting us. It was such a big thing so quickly to the people within it; that's just what happens in music."

On his status with VENOM INC.:

Abaddon: "In September last year, we were on tour in America and [my wife] Rachel found she was pregnant and I got the scan to see when the baby was due, which was in March. I was with the management, the management are a big American management company, I said, 'Look, I'm going to need to take March off. The baby is due in March. I need to take March off, maybe April.' That's all that was going to happen. I wasn't going to be working, I wanted to be here with the baby and see everything was all right. In the meantime, they put another drummer [Jeramie King] in who supposed to be filling in. They booked a tour for March when I asked them not to, they booked the tour, they put another drummer in who supposed to be filling in, but he wound up being the full-time drummer."

On whether he was kicked out of VENOM INC.:

On whether he knows why he was kicked out of VENOM INC.:

Abaddon: "I have no idea. I mean, I've read a lot of stuff, I've seen a lot of stuff and it's all bullshit. It's just about, I think the personalities are, I think they knew they wanted me in to get it done and it did the deal. It did what they wanted it to do at that period and it legitimized using the name."

On whether he gets along with VENOM INC. guitarist Jeff "Mantas" Dunn and VENOM frontman Conrad "Cronos" Lant, who, along with Abaddon, from 1979 to 1985 comprised the classic lineup of VENOM:

On what he would do if he saw Mantas in person:

Abaddon: "I'd tell him to go fuck himself. I mean, the thing that made us, as I was saying, when we used to walk into places, people could tell it was a band. That same thing, that same, I guess you could call it the x factor these days, that same thing also means it also can be a really bad marriage when it doesn't work. It doesn't work for the same reasons that it did work. It's just something..."

VENOM INC.'s debut album, "Avé", was released in August 2017 via Nuclear Blast. Joining Bray in the recording lineup for the disc and all of the band's initial tours were Dunn on guitar and Tony "Demolition Man" Dolan on bass and vocals.