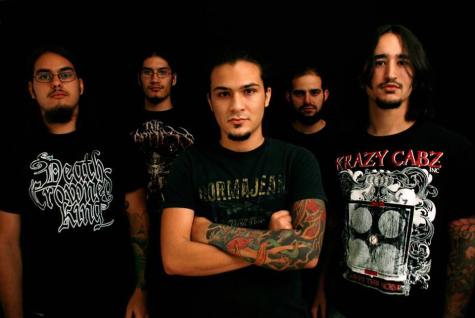 ABIOTIC stormed onto the underground metal scene with the release of the "A Universal Plague" EP in September 2011. Since then, through word of mouth online and steady gigging in the Southeast, ABIOTIC has become one of the top bands to watch. Their music video for "Vermosapien" was released in January 2012 and was viewed over 40,000 times within the first month of its release. The band has proven that they have the wherewithal to stand alongside the best and brightest in the technical death metal genre worldwide. Fans of OBSCURA, VEIL OF MAYA, and CANNIBAL CORPSE will immediately identify with their finely-honed technical attack.

Commented ABIOTIC on the signing; "We can't express how amazing it is to be on the same label as some of our favorite bands and how great it feels to be working with one of the biggest labels in metal!"

Added Metal Blade: "It's rare to come across a band as well put together as ABIOTIC. The video for 'Vermosapien' makes it immediately evident that this band has the chops, songs, work ethic, and live show to perform alongside any contemporary death metal act. We very much look forward to releasing this band's music to a worldwide audience later this year!"

Hometown and Florida-area fans will be able to see ABIOTIC's prowess live and in person on the "Shredded To Pieces Tour" with KING CONQUER, FORTY WINTERS, and IN REFERENCE TO A SINKING SHIP throughout April. Following those dates, ABIOTIC will tour the Midwest/southeast on the "Shred Till You're Dead Tour" with Sumerian Records artists ENFOLD DARKNESS and VALE OF PNATH, who recently signed a deal with Willowtip Records. Also in tow will be AFTER THE SPIRE. These tours feature some of the best up-and-coming talent in extreme metal and should not be missed!