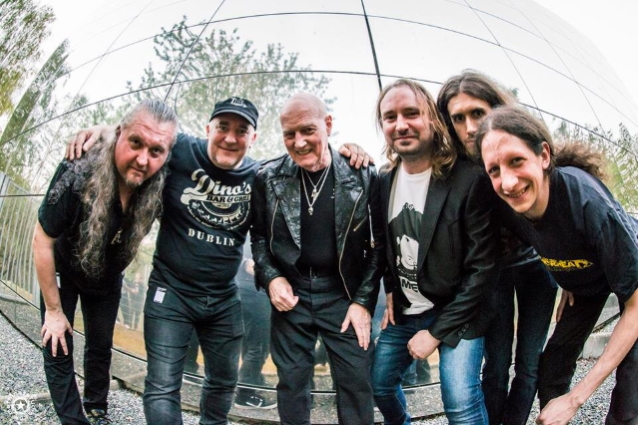 THE CHRIS SLADE TIMELINE, the band led by AC/DC drummer Chris Slade, has released the official music video for its first original song, "We Will Survive".

THE CHRIS SLADE TIMELINE said in a statement: "It was always the intention of THE CHRIS SLADE TIMELINE to do their own music but never enough time, now there's plenty.... so here is 'We Will Survive' - original song by vocalist Stevie Gee with additional music by James Cornford (guitar) and Michael J Clark (keys). Recorded at Anchor Baby Recording Company by Dan Lucas. Video created by our other vocalist Bun Davis."

THE CHRIS SLADE TIMELINE was formed in 2012 to celebrate Slade's 50-plus-year career as a professional rock drummer since he started with Tom Jones at the tender age of just 16 years. Since then, he has performed with all the greats, including AC/DC for two major world tours and two albums, MANFRED MANN'S EARTH BAND, Count Basie, Tom Jones, Paul Rodgers and Jimmy Page, Dave Gilmour, URIAH HEEP, Gary Moore, ASIA, Michael Schenker and many more.

THE CHRIS SLADE TIMELINE has toured Europe extensively, performing music from all of the above-mentioned artists and giving fans a chance to get "up close and personal" with the drumming legend. Their touring was interrupted for two years when Slade received the call from AC/DC at the end of 2014 to return for the "Rock Or Bust" tour.

THE CHRIS SLADE TIMELINE came back with a vengeance in 2017 to successfully extend their tour to France, Switzerland, Luxembourg, Belgium, Austria, Germany, Italy, Portugal and even Russia to perform at the Moscow Olympic Stadium for the Kremlin Cup ATP World Tennis Tournament — the first rock band ever to do this. An added interest is that in Europe they tour with the original drum kit from the AC/DC "Rock Or Bust" tour, including the Slade signature side bass drums made famous by "Thunderstruck".

THE CHRIS SLADE TIMELINE is: