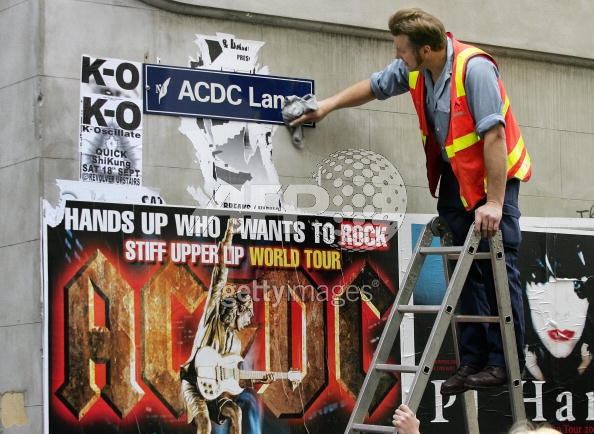 Lord Mayor John So erected the sign for ACDC Lane Friday to cheers and bagpipes playing their classic "It's a Long Way to the Top", according to The Sydney Morning Herald.

Cr So called Melburnians to pump their collective fists in the air in honour of the new thoroughfare, formerly known as Corporation Lane.

"As the song says, this is a highway to hell. But I say this is a lane to heaven. Let us rock," Cr So said.

Members of Australia's music scene were present to honour the rock legends who made Melbourne their home in the 1970s.

"I think the whole band would be blown away," music guru Ian "Molly" Meldrum said.

ACDC Lane is parallel with Swanston Street, where the video clip to "It's a Long Way to the Top" was filmed, and Spring Street, near the site of the band's Melbourne musical home, Berties.

The City of Melbourne has had copies of the laneway's sign made, in anticipation fans might steal it.

"We expect businesses to protect their address, so we don't expect there will be too many problems," Cr Kimberley Kitching said.

"We would expect it would be pretty hard to get it off though, you'd have to come with some pretty good equipment."