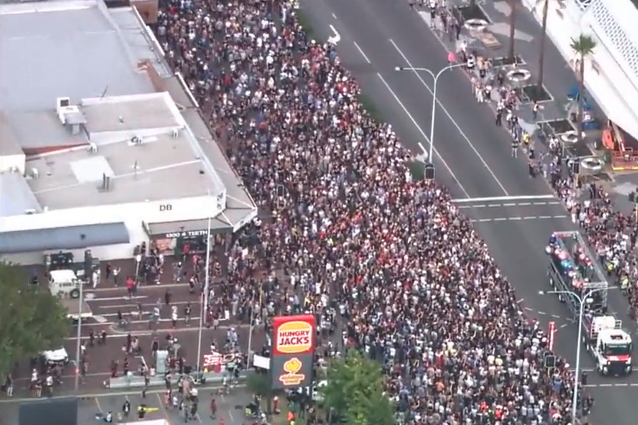 More than 100,000 people took part in a tribute to legendary AC/DC singer Bon Scott on March 1 in Australia.

"Highway To Hell" took place on the 40th anniversary since Scott was laid to rest at Fremantle Cemetery.

Perth's Canning Highway was closed to all vehicles except eight trucks that hosted eight different bands all singing their own version of AC/DC songs to commemorate Scott's passing.

Artistic director of the Perth Festival Ian Grandich said AC/DC had a special place in the heart of Perth and Fremantle.

"I know this highway like the back of my hand, and I knew the stories about AC/DC playing at the Raffles, and Bon drinking at the Leopold Hotel," he said.

A diverse selection of bands, including Finnish bluegrass outfit STEVE 'N' SEAGULLS, Japanese rock trio SHONEN KNIFE, AMYL AND THE SNIFFERS, THE PIGRAM BROTHERS, THE WA POLICE PIPE BAND and the PERTH SYMPHONY ORCHESTRA are among those who gave Scott the epic tribute he deserves.

Scott was invited to join AC/DC by Glasgow-born brothers and founding members Malcolm and Angus Young in 1974, and achieved international stardom before his death at the age of 33 in 1980 from alcohol poisoning.

AC/DC guitarist Angus Young told The Pulse Of Radio a while back that the band almost didn't get past Scott's death. "Bon was the big… He was a full-on frontman, plus he had this great character, you know. I mean, he just lived that rock 'n' roll life. With Bon, what you saw was what you got, and, yeah, it was pretty, pretty tough."