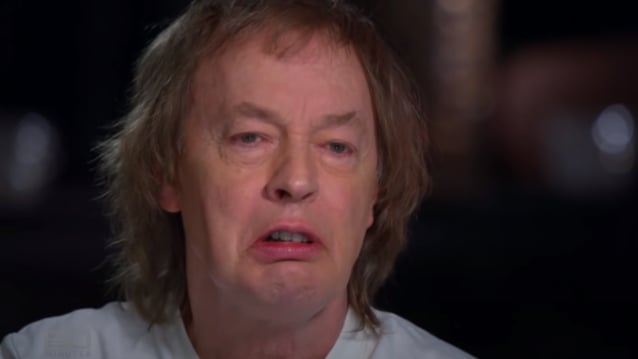 In a new interview with Australia's "60 Minutes", AC/DC guitarist Angus Young reflected on the passing of his brother, founding AC/DC rhythm guitarist Malcolm Young. Malcolm, who died in 2017 from effects of dementia at age 64, is credited as a writer on all 12 tracks on AC/DC's latest album, "Power Up".

According to Angus, music provided some of Malcolm's greatest comfort in his final days, after he was moved into full-time care in a nursing home facility in Sydney, Australia's eastern suburbs specializing in dementia.

"I think the hardest part was not so much him passing, because that was a kind of end, a relief," Angus said (see video below). "I think the worst part is the decline — that's the hard part. Because of how you knew him, and then to see that that was gone.

"I would say, even to the end, if I was there, from [ear to ear], he had a big smile," Angus continued. "And for me, that always gave me a kind of joy. Even though he was in that state, that was always the joy of it. And he still got a great kick if I played him guitar. He would try to tap his foot. But he always knew I was there. So that was a big thing. I was with him towards the end."

Singer Brian Johnson said that it was a "very emotional" experience when Malcolm died. "It's all too soon, innit?" he said. "It's too quick and too soon."

Angus previously told NME that one of the last records he ever played for Malcolm was THE ROLLING STONES' 2016 covers album "Blue And Lonesome". "He just thought it was great," Angus said.

"The physical side of him, he got great treatment for all that so he's good with all that, but the mental side has deteriorated," Angus said. "He himself has said, 'I won't be able to do it any more.'"