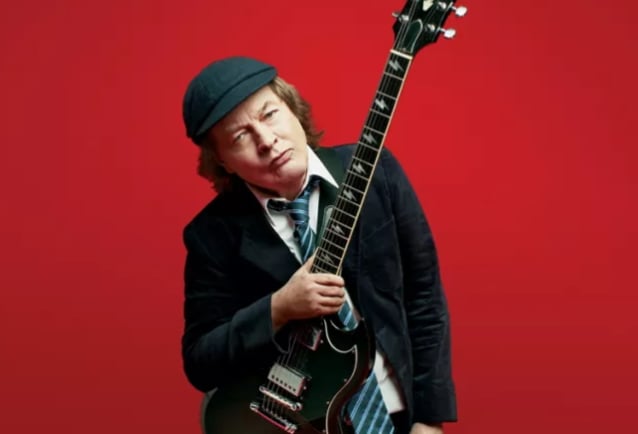 AC/DC's ANGUS YOUNG: 'We Aimed To Set Our Own Standard And Sound And Style'

AC/DC guitarist Angus Young and vocalist Brian Johnson recently talked to Greece's Red 96.3 radio station about the band's latest album, "Power Up". You can now listen to the chat below.

Speaking about AC/DC's signature sound, Angus said: "We aimed to set our own standard and sound and style. We wanted to always be a band that, if you heard it on the radio, you heard a song, or if you heard it anywhere, immediately [when] you heard it, you went, 'That's them. That's AC/DC. I hear it straight away. That's their style.' That's what we always wanted — to capture that and keep that style going. So any album we ever did, the variety comes in what you do with the songs, but the style and how it's played, and, again, with that powerful sound, that's what we strive for. So every album we ever did had to come up to that standard."

Angus also addressed the fact that "Power Up" contains musical ideas from Angus's late brother, founding AC/DC rhythm guitarist Malcolm Young, who died in 2017 from effects of dementia at age 64. Malcolm is credited as a writer on all 12 tracks on "Power Up".

"A lot of [the ideas], really, come from just before the last album," Angus said. "Prior to that album, Malcolm and myself, we'd had quite a good few years off, and we were very busy. We had just gotten a little studio, and we just kept cranking out songs. And we had so many songs that even when we went to do 'Black Ice', we just had boxes of songs. And normally when you do an album, you kind of go, 'This is where I am currently,' what you've been recently working on. I just wanted to go back and see what Malcolm and myself had worked on. And I just thought, 'I've gotta get these songs, get them on this album.' And I just knew that we had so much good material that I thought, yeah, Malcolm would definitely want this to come out.' For me, the only thing that I might have had to do is maybe think of an ending, or maybe a break. Or when I had gotten through [it], I would have said, 'We would have probably changed this piece and maybe done that.' But, again, I would think always how Mal, how he looked at it.

"Over the years, even when I would do ideas [by] myself, I always made them — my audience was Malcolm, because he was the critic; he was the guy that I needed to [get the approval from]," he continued. "So anything I ever did, I geared it towards what I knew was AC/DC and what would be appealing for AC/DC, to Mal. Whenever we came in with ideas, we tried to come in with good solid ideas, like verses, riffs, choruses, intros — that style."

"Power Up" was released in November. The follow-up to 2014's "Rock Or Bust" was recorded over a six-week period in August and September 2018 at Warehouse Studios in Vancouver with producer Brendan O'Brien, who also worked 2008's "Black Ice" and "Rock Or Bust". The effort features AC/DC's current lineup of Brian Johnson (vocals),Phil Rudd (drums),Cliff Williams (bass),Angus Young (guitar) and Stevie Young (guitar).