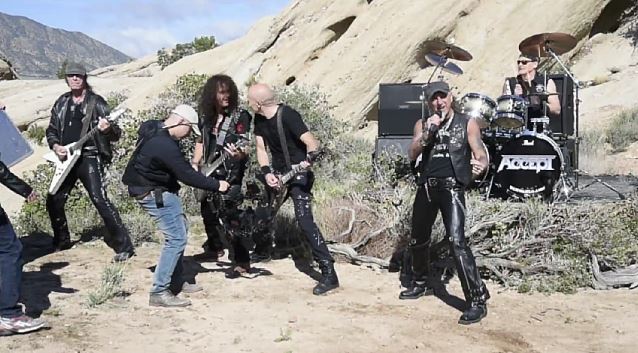 Behind-the-scenes footage from the making of "Stampede", the new video from German/American metallers ACCEPT, can be seen below. The clip was filmed on location in the high desert of California at the Devil's Punchbowl (a rock formation that looks like it's from another world) with director Greg Aronowitz ("Batman & Robin", "A.I. Artificial Intelligence", "The Lost World: Jurassic Park").

"Stampede" is taken from ACCEPT's new album, "Blind Rage", which sold around 6,400 copies in the United States in its first week of release.

"Blind Rage" was released on August 15 via Nuclear Blast. Like its two predecessors, 2010's "Blood Of The Nations" and 2012's "Stalingrad", the new effort was helmed by British producer Andy Sneap, who has previously worked with MEGADETH, EXODUS, TESTAMENT, ARCH ENEMY and KILLSWITCH ENGAGE. The cover artwork was created by Daniel Goldsworthy.