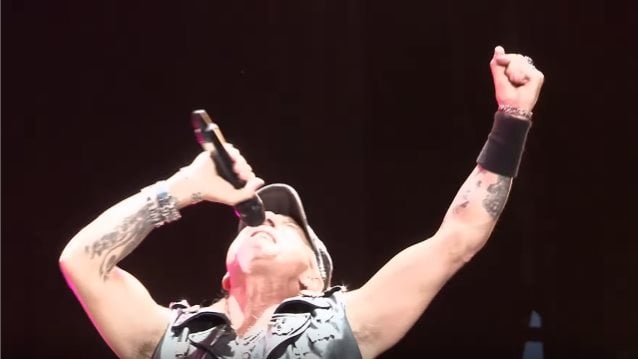 German/American metallers ACCEPT will release a new live set titled "Restless And Live" on January 13, 2017 via Nuclear Blast. This package will include the entire show ACCEPT played at 2015's Bang Your Head!!! festival in Balingen, Germany on Blu-ray/DVD plus two CDs.

The second official trailer for "Restless And Live" — in which guitarist Wolf Hoffmann and producer Andy Sneap talk about the recording of the show at Bang Your Head!!! — is available below.

Wolf explains: "It was actually never really planned; it sort of just happened. At Bang Your Head!!!, they always record their shows, so we just thought, 'Yeah, let them film it!'" After Andy praises their stage show as being crucial for the great atmosphere, Wolf continues: "Yes, as well as the crowd. We've been there before so it felt familiar to film it and see what happens. Then we got the footage and we thought, 'Wow, it's pretty good!'"

To give their fans a taster of what to expect from this forthcoming live release and to make the waiting more tolerable, the live clip for "Restless And Wild" can be seen below.

Commented Hoffmann: "We didn't know exactly what would happen back in 2010, what happens if... But this was six years ago and we've released three records since then. With 'Blind Rage', we had our first No. 1 chart record! There can be nothing nicer!"

The package's title, chosen by the band couldn't be more suitable: "'Restless And Live' simply fits what we experienced at Bang Your Head!!! and for what we stand for until today!" Wolf says. "It goes on and on and on! We're already working on a new production. The thought of being on the road again soon gets our blood flowing: And it is possible to overcome everything that happened before."

Asked why it's so important for ACCEPT to still make new music after all this time, Wolf recently told Canadian rock journalist Mitch Lafon: "For us, it was very important, especially since we got [singer] Mark [Tornillo], and when we had our reunion with Mark, the new singer, we really wanted to show to the fans and to us that we still can write relevant new songs, and so that's why we really did three albums in five or six years — really banged them out, one after the other. And those three albums are, in a lot of fans' views, as strong as most of the stuff we've done in the eighties, if not stronger. So I think it's very important for us to come up with new songs, 'cause, you know, once you stop trying, or you're just living on the past, I think that's no good. We're trying to stay relevant, and the fans really appreciate that."

Regarding what Mark Tornillo has added to ACCEPT's sound, Wolf said: "He very much inspired us to write songs, because all of a sudden, he can pretty much sing anything we want him to do. With Udo [Dirkschneider, former ACCEPT singer], it was much more limited, what worked and what didn't work. And Mark, man, anything Peter [Baltes, bass] and I come up with, he can perform, and so that opened a lot of doors, musically, for us, and that inspired us totally. But, like I said before, we always try to stay close to what ACCEPT fans are wanting to hear from us, 'cause we could write a bunch of stuff that was left and right, genre-wise, but I'm not sure if fans would really appreciate it that much. And that's also where [producer] Andy Sneap came in, especially during the 'Blood Of The Nations' [2010] recording. He really, sort of, forced us more to stay true to the course. 'Cause he grew up being an ACCEPT fan and listening to the old albums, and he came in with an expectation, 'All right, we're gonna make a great new ACCEPT album, but it'd better sound like I want it to sound as an ACCEPT fan.'"