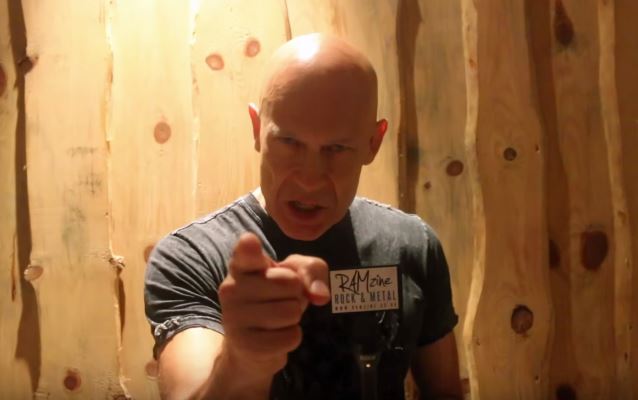 RAMzine conducted an interview with guitarist Wolf Hoffmann of German/American metallers ACCEPT at the 2015 edition of the the MetalDays festival, which was held on July 19-25 in Tolmin, Slovenia. You can now watch the chat below. A couple of excerpts follow (transcribed by BLABBERMOUTH.NET).

On the changes in the music industry since ACCEPT first started out:

Wolf: "Well, where do you wanna start? The whole recording industry, for one thing — it's completely different. But the thing that has not changed is going out there and do[ing] your thing on stage — that's pretty much like it was back in the day; that really hasn't changed. You go out and play your songs and the audience gets into it. That whole thing is still exactly the same. The whole touring part of the business is pretty much exactly the same. But, of course, making the record, selling the record and all that kind [of stuff]… distributing… that has all changed dramatically. Everybody knows that."

On heavy metal fans buying physical product in greater numbers than is the case with fans of other genres of music:

Wolf: "Metal is still a little different in that respect, because people really wanna… A lot of 'em are collectors, they wanna have the physical album and they wanna get it signed by the band. And you can't sign an MP3. So we're very lucky in that regard, that a lot of people still buy the actual product. [And vinyl is] making a huge comeback. As a matter of fact, we're releasing our albums, or our records, in all kinds of different colors of vinyls and the good, heavy-duty-quality vinyl that the collectors like. And I have to say, there's something to be said… I mean, I'm not a collector or record fanatic by any means, but I love looking at the big artwork, I love handling these big, old vinyl records."

On the shift in consumer habits toward streaming music rather than buying physical product or downloading albums:

Wolf: "Well, it seems like the signs of the time that it's going in that direction — nobody can deny that — but I hope it's never gonna go completely to that point where people just give away everything, because that would be the death of a lot of bands and artists, because you can't live just… It's very expensive to make a record and it takes a long time, and you can't just expect people to give it away because it's not working; the business model is just not there."

On ACCEPT's plans for the immediate future:

Wolf: "We will continue for a few more weeks, this run of touring, and then we'll take a little break and come back in the fall, but we're pretty much wrapping up the 'Blind Rage' tour at this point; it's the very last phase of this whole cycle. And then the next album will have to be written and to be recorded, and how long that's gonna take and when that's all gonna happen, who knows? But it'll happen; that's all I know."

ACCEPT parted ways with guitarist Herman Frank and drummer Stefan Schwarzmann last December. The band explained in a statement at the time: "We and the fans all knew that [Herman and Stefan] had their own careers and that eventually we would run into scheduling and other conflicts beyond our control."

Frank and Schwarzmann are playing in PANZER, a new project also featuring vocalist and bassist Schmier, best known as frontman of DESTRUCTION.