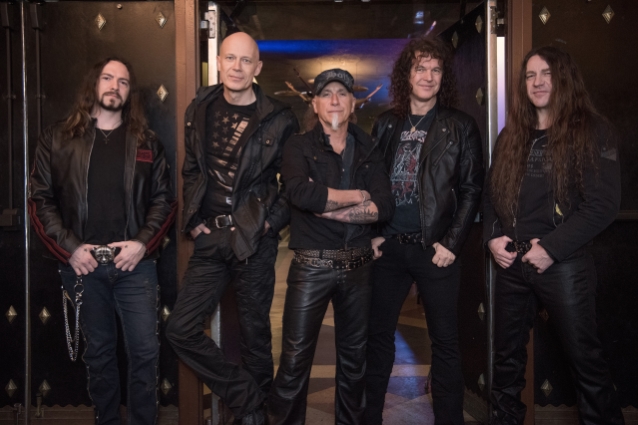 Her decision to stop overseeing the band's activities was announced earlier today in a letter posted to ACCEPT's official web site.

The letter, which was signed by "Fred and Øystein," states that "Gaby is fine, as is the band, who will continue to play and record." It adds: "Gaby is a bit tired after many years of intense activity, and she needs some rest and time for herself. It's not a farewell. Her heart will still be with us, but she won't engage in professional activities anymore."

In a 2014 interview with MusicInterviewCorner, ACCEPT guitarist Wolf Hoffmann, who is married to Gaby, credited his wife with coming up with the visual imagery for ACCEPT. He explained: "Well, my wife and our manager, Gaby, has a lot of these ideas over the years; she's responsible for a lot of the lyrics and a lot of the album covers, a lot of ideas. Everything around the band, really, in one way or another way goes back to her ideas. She's really the invisible, silent force behind this band. Sometimes we're just like puppets on a string and she's guiding us from above. A mind controller."

After then-ACCEPT bassist Peter Baltes denied that he was jealous about the fact that Wolf was married to ACCEPT's manager, Hoffmann said: "This has been going on for so long. I mean, I've known Peter for, what? 40 years now. Can you imagine? We've been playing and writing songs together for all these years, so something seems to work here."

This past April, ACCEPT announced the addition of bassist Martin Motnik to the group's ranks.

Baltes exited ACCEPT last November after 42 years with the band.