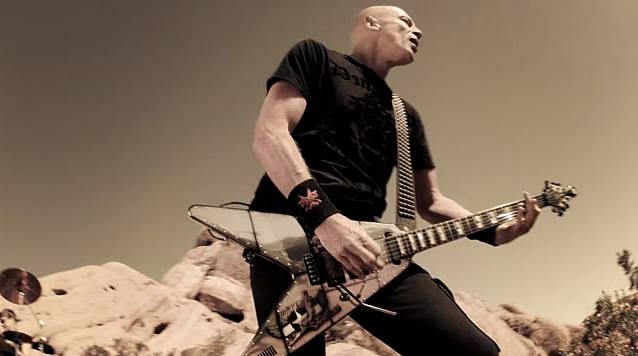 Niclas Müller-Hansen of Rocksverige.se recently conducted an interview with guitarist Wolf Hoffmann of German/American metallers ACCEPT. A couple of excerpts from the chat follow below.

Rocksverige.se: Where did the title "Blind Rage" come from and how did you tie that in with the artwork?

Wolf: We were just looking for a title and I don't know who eventually came up with it. There were some wild guesses to what the album could be called. We had the artwork first and then "Blind Rage" seemed to fit the most. None of the other titles we had made sense with the artwork, so we just decided on "Blind Rage". There's a lot of blind rage going on in the world; just look at what's going on politically and in places like the Ukraine. It just felt right and it sounded like ACCEPT, so "Heck, let's call it 'Blind Rage'!"

Rocksverige.se: You worked with [producer] Andy Sneap again. Last time I talked to you, the only bad thing you had to say about him, was that he's a vegetarian.

Wolf: [Laughs] He still is and he's lost a ton of weight. So that's another bad thing. [Laughs] No, he's a good guy and we get along great and it seems like we've found our recipe to work now, so why change it?

Rocksverige.se: Maybe he'll be to you what Bob Rock was to METALLICA?

Wolf: We'll see. So far it's working out great. He's getting a great sound and he's not a complicated guy to work with, which is good. We've worked with some producers in the past with huge egos and everything was a drama. He's not like that at all. Anybody who knows says what a breeze and fun guy he is to be around. I like it!

Rocksverige.se: It was recorded in Nashville, right?

Wolf: Yes, In Nashville and some overdubs in New Jersey and then we mixed it in England. We had [Andy] come to us, instead of us to him and we recorded it in the studio in my house. Well, studio is a loose term, but it's a place to make music. Technically, it's so easy nowadays. All you need is a few preamps and some microphones. You can practically record anywhere. Especially guitar tones and the technical stuff certainly helps.

Rocksverige.se: You had a lot of songs and the album is about 11 tracks. The once that didn't make it, were they full songs or just ideas?

Wolf: In this case, they were pretty full songs. Sometimes you can't really judge a song until you've heard the finished vocals on it. In this case, they just didn't fit the rest of the songs. There was this one song we all felt was a cool song, but somehow it just didn't fit in with the others so we left it out. I think we finished 13 songs or maybe 14. They will end up as bonus tracks on, like, the Japanese version.

Read the entire interview at Rocksverige.se.