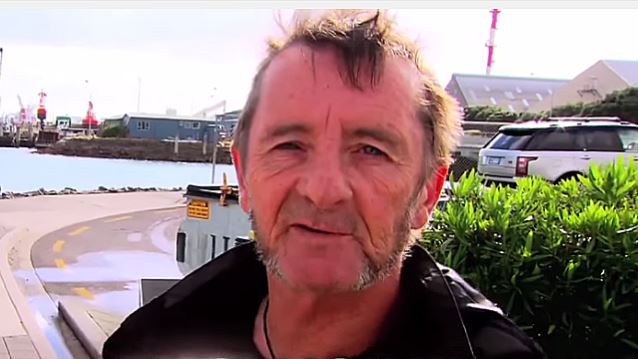 Former AC/DC drummer Phil Rudd has broken his silence over his latest exit from the group, saying he is "very disappointed" over the breakdown of his relationship with his bandmates.

Rudd last month pleaded guilty to a charge of threatening to kill a former employee after his first solo effort, "Head Job", flopped. It was a month later that he called an associate and asked him to "take out" Rudd's personal assistant, who Rudd then called himself and said, "I'm going to come over and kill you."

Rudd offered the associate $200,000, a motorbike and the choice of one of his cars or a house as payment for the hit, which the associate turned down.

After his initial call to his assistant, Rudd made several more but the assistant hung up each time. Prosecutors said that the assistant "was genuinely fearful of his safety."

When police later raided Rudd's waterside home in the New Zealand town of Tauranga, they spoke with him in his lounge. At one point he picked up a container from the coffee table and put it on the floor. Later testing of the container found cannabis crumbs.

When police searched his jeans, they found a similar bag of methamphetamine. There were more drugs in the bedroom and stashed in the hallway cupboard.

"I got back here and the people who I had working for me for this [album] launch — it was a total fucking disaster. So I was really pissed off."

In an interview with USA Today last fall, AC/DC guitarist Angus Young stated about Rudd: "Phil created his own situation. It's a hard thing to say about the guy. He's a great drummer, and he's done a lot of stuff for us. But he seems to have let himself go. He's not the Phil we've known from the past."

Speaking about his relationship with his bandmates, Rudd told "A Current Affair": "I wrote them a letter, I tried to get in contact with Angus... I've had no contact with anybody.

Drummer Chris Slade rejoined AC/DC in February for its performance at the Grammy Awards and will play on its world tour as a replacement for Rudd.

"There'll be another tour and another and I'll be on it," he said. "It'll go until we all die. We'll probably all have to be dead before it stops."

He added: "I've seen the errors of my ways... It's onward and upward from here."

Rudd also pleaded guilty to a drug possession charge. A second charge of threatening to kill was dropped. Rudd could face up to seven years in prison for the threatening to kill charge. He is currently out on bail until his sentencing hearing on June 26.