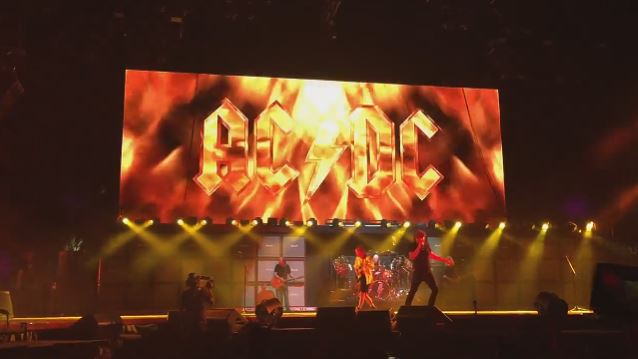 AC/DC played its second full North American show in over five years on Friday (April 17) when the band headlined the second of two shows at the Coachella Valley Music And Arts Festival in Indio, California. Aside from two songs performed at the Grammy Awards in February, this also marked the second full appearance by the new AC/DC lineup, in which guitarist Stevie Young has replaced Malcolm Young and drummer Chris Slade has stepped in for Phil Rudd.

AC/DC's 20-song set kicked off with "Hell Ain't A Bad Place To Be", featured three songs from the band's latest album, "Rock Or Bust" album (the title track, first single "Play Ball", and "Baptism By Fire"),and ended with the band's staple show closer, "For Those About To Rock".

AC/DC's setlist was virtually identical to the one performed by the band on April 10, with one exception: AC/DC dropped "The Jack" midway through the set and replaced it with the group's 1975 classic "High Voltage".

The setlist for the April 17 concert was as follows:

A review of the show can be found at DesertSun.com.

This year's Coachella headliners will possibly earn between $750,000 and $2 million each, according to Billboard.com.

AC/DC's sixteenth studio album, "Rock Or Bust", has sold around 517,000 copies since debuting at No. 3 on the Billboard album chart back in December.

It's the band's first album without Malcolm, who is suffering from dementia. Rudd is out after being arrested last November on charges of threatening to kill and possession of methamphetamine and cannabis.