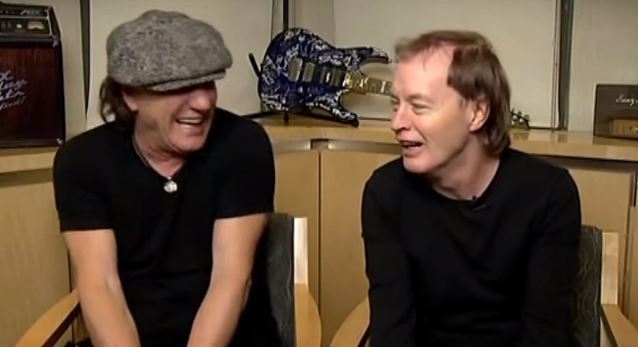 AC/DC singer Brian Johnson and guitarist Angus Young were recently interviewed on "The Project", the Australian television program airing weeknights across Australia on network Ten. You can watch video footage of their appearance below.

Asked about AC/DC's video for the new song "Play Ball", which is a tribute to all things sports, but with an emphasis on female athletes in bikinis, Young said: "I've gotta admit. When they watched the Olympics, I'm always the one… I mean, I tuned in for the bikini beach volleyball. That's one of my favorite sports. If that wasn't on, I don't think I'd be watching."

According to music industry web site Hits Daily Double, AC/DC's new album, "Rock Or Bust", is likely to sell between 135,000 and 145,000 copies copies in the United States in its first week of release. The estimate was based on two-day sales reports compiled after the record arrived in stores on December 2. The chart will be unveiled on Wednesday, December 10.

If the Hits Daily Double prediction is accurate, the "Rock Or Bust" first-week sales would be a huge drop from the opening number of AC/DC's last CD, 2008's "Black Ice", which topped sales charts in 29 countries, including the U.S., where it sold an incredible 784,288 in its first week — marking the band's first-ever No. 1 debut on the U.S. album chart. "Black Ice" went on to sell another 270,923 units in its second week, bringing the first two weeks' sales in the U.S. to over 1 million copies. Sold exclusively at Wal-Mart, Sam's Club, and ACDC.com in the U.S., "Black Ice" quickly became the biggest-selling rock record of 2008.

"Rock Or Bust" was released on December 2. The 11-song set is AC/DC's first without guitarist Malcolm Young, who is suffering from dementia. He has been replaced by nephew Stevie Young.

AC/DC made it official in September that Malcolm would no longer record or perform with the group. His family disclosed a short time later that he was afflicted with dementia. The guitarist was rumored to have suffered a stroke earlier this year.

AC/DC drummer Phil Rudd put his own future with the band in doubt, showing up late for the recording sessions, missing a video and photo shoot entirely, and finally being arrested on charges of murder-for-hire, threatening to kill and drug possession. Rudd showed up for a court hearing last month but his status with the band remains unclear.