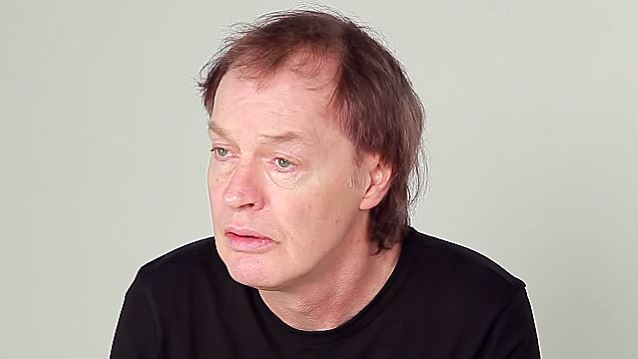 AC/DC's ANGUS YOUNG On MALCOLM: 'Being Brothers, We Always Had A Kind Of Psychic Thing Going On'

During a brand new interview with VH1.com, AC/DC guitarist Angus Young spoke about what he will miss most about playng with his brother Malcolm who recently retired from the band due to health issues.

Malcolm and Angus Young's nephew, Stevie Young, played rhythm guitar on AC/DC's new album, "Rock Or Bust", and will be part of the lineup for the band's 2015 world tour.

"It is kind of hard, you know, being brothers… just being brothers, we always had a kind of psychic thing going on," Angus told VH1.com. "I don't know how to explain it, but we just seemed to know what each one of us was going to play next. It was bizarre sometimes. He could go to play something and I'm following him and then he would change something and I had anticipated him. So there was that kind of thing. And I don't know what it is. It's a strange thing. I guess maybe it's just a brothers thing, because when the two of us used to play together in the beginning, Malcolm would always, even if we were playing in a bar or something, and somebody said they wanted to hear some song, Malcolm would just go into it and I wouldn't know what to do about it and I would just have to follow him. Usually by the time we finished, that would be when I'd actually learned the song. But you just get into this thing of you, the two of us would be in sync with each other. With Stevie, he plays the same as Malcolm, but probably I've got to sync in with him. But yeah, it will be tough. But in the '80s we got through it, so you know…"

Angus recently said that Stevie was the only logical choice to replace Malcolm Young when the latter retired from the band earlier this year due to the onset of dementia.

Angus told Sweden's Aftonbladet, "It was Malcolm himself [who said we should carry on]... and the logical choice to fulfill Mal's role on the project was my nephew Stevie. He had filled in for Mal in 1988 and he had done an American tour, a whole American tour, and he did it well."

Angus told The Pulse Of Radio that Stevie was a natural fit. "He just plugged into what we were doing, 'cause he's of the same age era as Malcolm and myself," he said. "He was my eldest brother's son. You know, we all grew up together. Mal played that style how he played that rhythm style. Stevie, you know, he emulated that."

Asked if it was emotional for AC/DC to continue without Malcolm, Angus said, "When we were recording and listening, I didn't notice. Yeah, when you look, [you go], 'Yeah, it's not Malcolm.'"