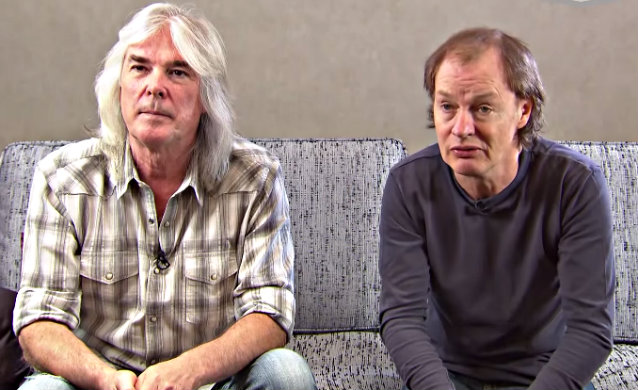 AC/DC's ANGUS YOUNG: Why It Was Time To Use Word 'Rock' In Album Title Again

Germany's Filtr TV conducted an interview with AC/DC guitarist Angus Young and bassist Cliff Williams on November 6 in Düsseldorf, Germany. You can now watch the chat below. A couple of excerpts follow (transcribed by BLABBERMOUTH.NET).

On the songwriting process for AC/DC's new album, "Rock Or Bust":

Angus: "The songwriting process pretty much has been the same… even for this. It's the same approach for the new album, 'Rock Or Bust'. It's been the same for any album we've ever done. You use some new ideas, some old ideas that were good ideas but you never used before. 'Cause over the years you have a lot of ideas that sometimes you had not finished. You had a good riff here and a good chorus. And sometimes you just get the spark and you go, 'Oh, these two go together. It's like they were made for each other.' But that has always been part of AC/DC."

"A lot of the writing went with me and my brother Malcolm [Young, guitar], who's not with us now. So a lot of that we always kind of did together. We worked everything out, especially the music side. And then usually when we had a lot of good ideas together, then we would let the guys know, 'Hey, we're ready to roll. We've got a lot of good material.' So when everyone's got a free calendar, we all hook up and then you start recording."

On whether any of Malcolm's ideas were used on "Rock Or Bust":

Angus: In the songwriting for the [new album], yes. Because [there are] a lot of Malcolm's ideas. I mean, he was still putting ideas out, He was still doing material, even though he got to a point where he stopped, but he kept going with anything that he had. Which I've got — he made sure that [I would have] any new ideas that he had."

All 500 million of iTunes users can now listen to "Rock Or Bust" a week ahead of its December 2 release date. The complete set is now streaming as part of iTunes' "First Play" program.

AC/DC has used "rock" in a lot of song and album titles and The Pulse Of Radio asked Angus Young why it felt like time to do it again. "Well, 'Rock Or Bust', it's a good, strong title and it's got the word 'rock' in it, you know? [laughs] 'Cause everyone says, jeez, you know, how many songs have they got with 'rock' in the title in it. But they've got to cut us some slack — I mean, we've made 16 albums, you know."