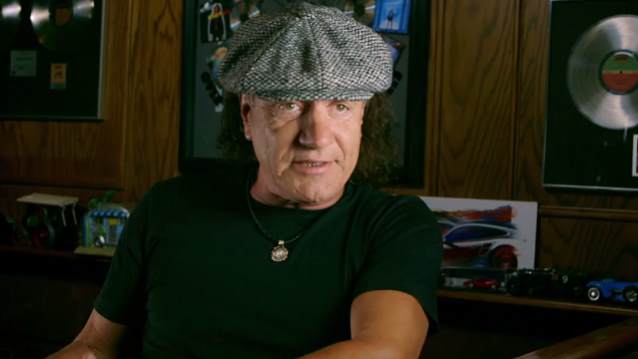 According to The Northern Echo, AC/DC singer Brian Johnson has offered his encouragement and support to Sporting Memories Network, a UK charity for people suffering from dementia. Johnson reportedly called Sporting Memories "out of the blue" after hearing about their projects with older people, especially men, who are suffering from depression and dementia by involving them in groups which improve their physical and mental well-being.

"It's an absolutely amazing boost for a charity run by two people to receive a phone call from the singer of a group that has sold more than 200 million records worldwide," Tony Jameson-Allen, the organization's director, told The Northern Echo.

AC/DC guitarist Malcolm Young's family issued a statement on September 30 confirming reports that he is afflicted with dementia, a brain disorder that interferes with a person's ability to carry out everyday tasks. The statement released to People magazine said, "Malcolm is suffering from dementia and the family thanks you for respecting their privacy."

Dementia can be reversed when it's caused by dehydration or other treatable conditions. But most forms of dementia worsen gradually over time and can't be corrected.

According to WebMD, the average survival time for people diagnosed with dementia is about four and a half years. However, those diagnosed before age 70 typically live for a decade or longer.

The Sydney Morning Herald reported last month that Malcolm is being treated in a nursing home in Sydney, Australia. The facility is believed to be Lulworth House in Elizabeth Bay. A Young family connection told the newspaper, "If you were in the room with [Malcolm] and walked out, then came back in one minute later, he wouldn't remember who you are. He has a complete loss of short-term memory. His wife, Linda, has put him in full-time care."

The 61-year-old guitarist is believed to have suffered a stroke sometime last year and was moved back to Australia from Europe, where he had been living.

Former AC/DC manager Michael Browning said, "I think [Malcolm's illness] came on very suddenly… It's shocking. It's terrible. Sadly for AC/DC, they're losing their creator, their mentor. He's the genius behind the band."

Malcolm did not participate in the recording sessions for AC/DC's new studio album, "Rock Or Bust", which is set to arrive on December 2.

His replacement on the album and the band's upcoming world tour will be Stevie Young, nephew of Malcolm and AC/DC guitarist Angus Young.

The band officially announced last month that Malcolm would not be returning to the lineup.

"We miss Malcolm, obviously," Johnson told TeamRock Radio this past July. "He's a fighter. He's in hospital, but he's a fighter. We've got our fingers crossed that he'll get strong again.

"Stevie, Malcolm's nephew, was magnificent, but when you're recording with this thing hanging over you and your work mate isn't well, it's difficult. But I'm sure he was rooting for us. He's such a strong man. He's a small guy, but he's very strong. He's proud and he's very private, so we can't say too much."