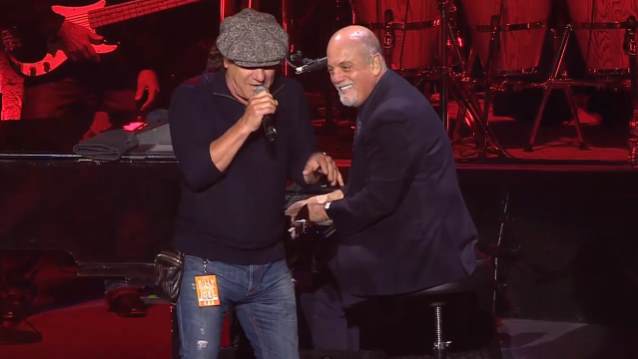 AC/DC's BRIAN JOHNSON: Pro-Shot Footage Of 'You Shook Me' Performance With BILLY JOEL

AC/DC singer Brian Johnson joined Billy Joel on stage on March 21 at Madison Square Garden in New York City to perform the AC/DC classic "You Shook Me All Night Long". Professionally filmed video footage of Johnson's appearance can be seen below.

Brian came up on stage about midway through Billy's concert, which was one of a series of shows by Joel at the Garden. After Billy said Johnson was a member of one of the best bands he'd ever seen live, Joel and his band began playing the AC/DC song with Johnson handling all lead vocals.

Joel has been known to cover AC/DC's "Highway To Hell" during his concerts, and has sung the track live with Johnson before, but this was the first time the two have performed "You Shook Me All Night Long" together.

AC/DC has issued a statement confirming widespread reports that founding guitarist Malcolm Young was stepping away from the band due to illness. The statement, however, refuted rumors that the group was breaking up as a result, saying that the legendary Australian act will "continue to make music."

The statement did not indicate the nature or extent of Malcolm's condition, but several Australian reports indicated that he may have had a stroke last month that left him unable to perform, either live or in the studio.

One source told The Age that the Young family was mulling full-time care for the guitarist, who was said to be having difficulty remembering familiar faces and communicating.

While plans for a tour to mark the group's 40th anniversary remain unclear, singer Brian Johnson told the U.K.'s Telegraph that the band was "definitely getting together in May in Vancouver" to begin work on its 16th studio album.

Without naming Malcolm, Johnson also said in the interview, "One of the boys has a debilitating illness, but I don't want to say too much about it. He is very proud and private, a wonderful chap. We've been pals for 35 years and I look up to him very much."

AC/DC's last album was 2008's "Black Ice", one of the group's most successful later albums, which was followed by a nearly two-year world tour.