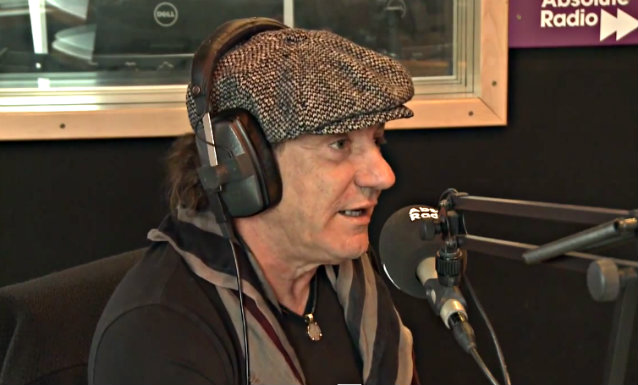 AC/DC singer Brian Johnson spoke to UK's Absolute Radio the inspiration behind the band's classic song "You Shook Me All Night Long".

"The boys had a title," Johnson said (see video below). '[AC/DC guitarists] Malcolm and Angus [Young] said, 'Listen, we've got this song. It's called 'Shook Me All Night Long'. That's what we want the song to be called.' And if you listen to the chords, [the chorus] just fell into place so I can't claim any credit on that thing."

He continued: "It was as quick as it had to be, which was that night. I guess I had to try and impress somebody.

"It was just a thing that came at the time, and I still think it's one of the greatest rock and roll riffs I've ever heard in my life."

"You Shook Me All Night Long" is taken from AC/DC's "Back In Black" album, which was certified 22-times-platinum on December 13, 2007 by the RIAA (Recording Industry Association of America) for sales in excess of 22 million copies in the United States.

The new AC/DC album, "Rock Or Bust", is scheduled for release on December 2. The CD was recorded in Vancouver, Canada earlier this year.

AC/DC drummer Phil Rudd was missing from the band's new publicity photo and was also a no-show at the group's video shoot for "Play Ball" and "Rock Or Bust". Rudd was replaced for the filming by drummer Bob Richards (who had previously played with SHOGUN and IRON MAIDEN guitarist Adrian Smith).

On November 6, Rudd was charged with attempting to "procure murder" by New Zealand police but the charge was dropped a day later by the Crown Solicitor Greg Hollister-Jones after a meeting with Rudd's attorney, Paul Mabey, and police. Rudd still faces one charge of threatening to kill as well as possession of meth and marijuana, which his lawyer described as "minor."