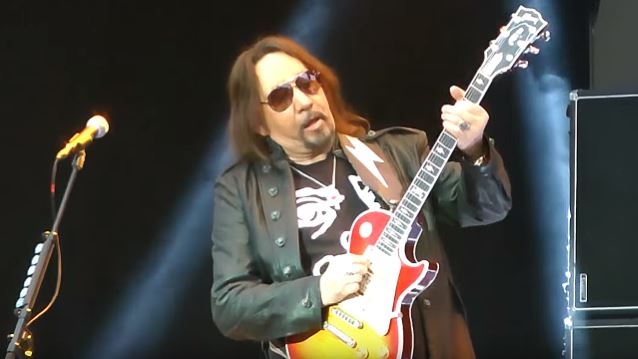 Original KISS guitarist Ace Frehley was admitted to Wilkes-Barre General Hospital in Wilkes-Barre, Pennsylvania following his show last night (Friday, April 15) at the F.M. Kirby Center in the city. After extensive testing, it was determined that Ace's symptoms were due to exhaustion and dehydration.

In consultation with his doctors, Ace, who aside from the exhaustion and dehydration has been given a clean bill of health, has reluctantly agreed to cancel tonight's sold-out show at the Chance in Poughkeepsie, New York. The venue is working to reschedule the date in late September and expects to announce an exact date later this week.

In the meantime, ticket buyers for tonight's show can use their tickets for the rescheduled date in September or return them at the point of purchase for a full refund. AceFrehley.com VIP Experience and Guitar Signature packages purchasers will be contacted by AceFrehley.com and can either obtain a full refund or use their packages on the rescheduled date.

Once released from the hospital, Ace will be heading home to Southern California to recuperate.

Fan-filmed video footage of the Wilkes-Barre concert can be seen below.

Ace has just released "Origins Vol. 1", a collection of twelve newly recorded classics from his formative years featuring some of the biggest names in rock and roll. Most notably, KISS frontman Paul Stanley joins Ace on FREE's hit "Fire And Water". This collaboration marks the first time that Ace and Paul appear on the same studio recording since KISS's 1998 reunion album "Psycho Circus".