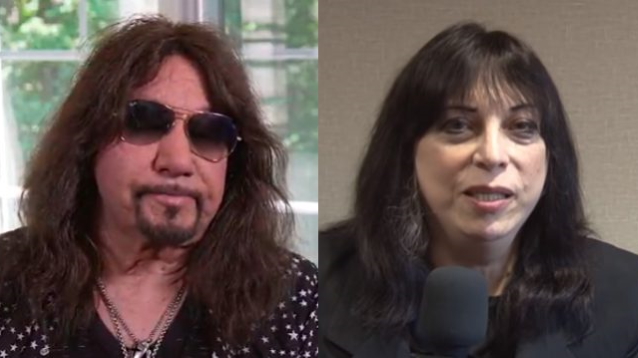 Ace Frehley and Vinnie Vincent are among the scheduled performers at Creatures Fest 2022, set to take place Memorial Day Weekend, May 27-29, 2022 in Nashville, Tennessee. Other Creatures Fest performers include VIXEN, QUIET RIOT, ENUFF Z'NUFF, John Corabi, RETURN OF THE COMET and PRETTY BOY FLOYD. More detailed information, including tickets and host hotel, will be made available in early January 2022.

"I'm on good terms with Paul [Stanley, guitar/vocals] and Gene [Simmons, bass/vocals], which is nice, because we created something really special in the early '70s that has outlasted so many other bands. And God bless 'em. They're still doing it; I'm still doing it. Peter [Criss, drums] is still around. I'm not quite sure why Peter hadn't toured over the years as much as I have, but it is what it is."

Vincent — who was a member of KISS when the band publicly "unmasked" in 1983 — made several public appearances in 2018 after spending the preceding two decades out of the public eye.

In 1983, KISS wrote and released "Lick It Up" — their first album without makeup — a recording on which Vincent co-wrote eight of 10 songs, including the title track, which remains a staple of the group's live performances to this day.

In 1996, Vincent released a solo EP, "Euphoria", which featured vocals by former VVI singer Fleischman and included material from sessions recorded around 1990. Soon after that, Vincent vanished from the public eye and remained off the grid for more than two decades.

In November 2019, KISS manager Doc McGhee claimed that all former members of the group have been contacted about possibly taking part in the band's last-ever tour.

Prior to the "End Of The Road" launch, Paul Stanley and Gene Simmons weren't very enthusiastic about the prospect of an onstage collaboration with Vinnie Vincent. "Now Vinnie, that's one exception, and for so many reasons," Stanley told Guitar World. "I would say that's not someone who I want to celebrate."

Simmons also chimed in, explaining that "it's worth stating that Vinnie has sued the band and lost 14 times. I'm not here to cast any aspersions. He's a talented guy. That's why he was in the band. But would I depend on him to get up onstage and do anything? Never. … Can he come to the shows? Of course! Anybody can. But onstage? Never."

In April 2018, Vincent joined Simmons at the KISS bassist/vocalist's "Vault" event in Nashville, Tennessee. He later said in an interview that he felt that got "a cold reception" and was "treated very indifferently" by Gene at the event.