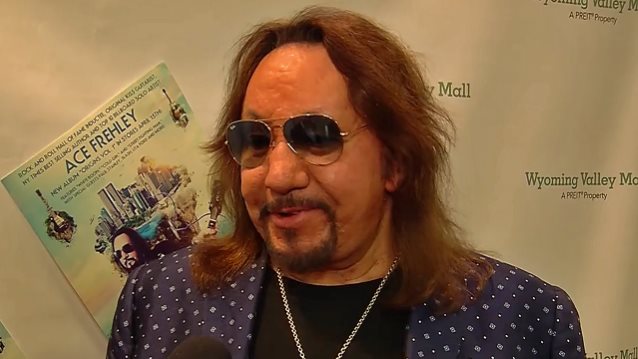 Eyewitness News conducted an interview with original KISS guitarist Ace Frehley on the day of the release of his covers album, "Origins, Vol. 1". You can now watch the chat below.

Asked to name the highlights of his time with KISS, Ace said: "Well, you know, the first thing that comes to mind is that I grew up in New York City, so Madison Square Garden was a highlight for me. And one weekend in the '70s, we did three sold-out shows at Madison Square Garden. So that was a big highlight. Another big highlight was when I rejoined the group for the reunion tour and we played Detroit in a sold-out stadium… Was it Dodger Stadium? Tiger Stadium. I can't get the names right, but everybody knows about it. But everybody knows about it. It sold out in, like, 45 minutes. And that was a special night. It was almost like déjà vu, because here I am in 1996, after I had left the group in '82, and I've got the same makeup on, the same costume, playing the same songs. So I felt like I time-traveled back. But it was a special night."