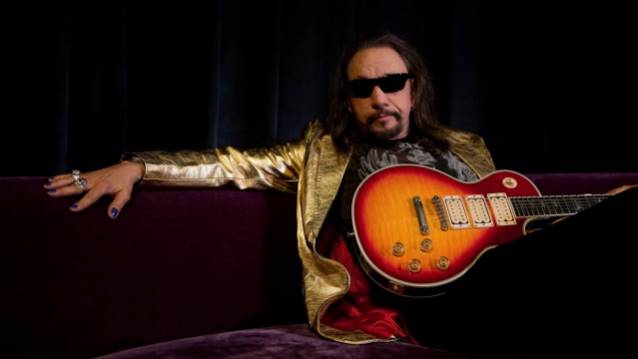 FREHLEY: 'PAUL And GENE Have Been Insinuating That PETER And Myself Don't Have It Anymore, Which Is A Load Of Crap'

Original KISS guitarist Ace Frehley recently spoke to Revolver magazine about the band's controversial announcement that no members of KISS will be playing at the April 10 Rock And Roll Hall Of Fame induction ceremony in Brooklyn.

"Originally, the Hall Of Fame asked all four of us to do a reunion and that was presented to each original member who is being inducted," Frehley said. "Then some time went by, and I heard a couple weeks back that Paul [Stanley, KISS guitarist/vocalist] and Gene [Simmons, KISS bassist/vocalist] decided to perform with Tommy [Thayer] and Eric [Singer]. And I had gone on the Eddie Trunk show earlier, about a month prior to the last time I went on, and I was saying, 'Yeah, it would be great if we did a reunion.' It was shot down, but I think I led the fans to believe there was going to be a reunion. With tickets going on sale the following Monday, I decided to go on Ed Trunk's show a couple weeks back when I was in Las Vegas recording. I just wanted to let the fans know that last I heard, Paul and Gene decided not to perform with me and [original KISS drummer] Peter [Criss] and opted to perform with Tommy and Eric. It got a lot of people pissed off, but I had to lay it out because I didn't want fans buying tickets for an event they weren't going to see.

"Last I heard, there's going to be no performance.

"There has been a lot of negotiating behind closed doors and I'm sworn to secrecy. But last I heard, there's just going to be no performance. I don't know what the reason is. And at this point, I don't care, because it was renting so much space in my head, it was affecting my creativity and finishing up my record."

He continued: "I've been reading stuff on the Internet and Paul and Gene have been insinuating that maybe Peter and myself don't have it anymore, which is a load of crap. We proved otherwise at [last October's during the all-star jam at the 30th-anniversary party for VH1 Classic 'That Metal Show' co-host Eddie Trunk's radio show at the Hard Rock Café in New York City], but aside from that, it's very misleading. I think somehow they wanted to validate the current lineup. I don't have a problem with the current lineup. It is what it is — it's half a KISS cover band. But the event at the Rock And Roll Hall Of Fame is about the four original members. Nobody else is being inducted except the four. If [current KISS members] Tommy [Thayer, guitar] and Eric [Singer, drums] were being inducted as well, along with Bruce [Kulick] and Eric Carr and Vinnie Vincent — yeah, why not.

Asked why the Hall Of Fame didn't nominate everyone who has been in the band, Ace said: "I don't want to take any potshots at the Rock And Roll Hall Of Fame. It's a cool organization. But it is what it is. Obviously, Paul [Stanley] brought out the inconsistencies [in recent interviews]. They bend their own rules. I don't want to get political, though, because I hate politics. I've always said to keep politics and music separate."