Original KISS guitarist Ace Frehley will release "Space Invader", his first new solo album in five years, via Entertainment One Music (eOne Music) on June 24. The CD, which will be released in Europe on July 7 through SPV/Steamhammer, will include at least nine brand new original songs as well as a cover of Steve Miller's "The Joker". This album is the first release under Frehley's new universal deal on eOne Music. Joining Frehley in the studio for some of the "Space Invader" sessions were drummer Matt Starr (BURNING RAIN) and bassist Chris Wyse (THE CULT, OWL).

Frehley has released an official statement surrounding the exciting news: "Life on Earth has been very good to me, and the body of work I've created over the years has withstood the test of time. Today I see no obstacles before me and my creativity has never been more fine tuned. Growing up in an Alien world has enhanced my senses and allowed me to succeed where others would have failed. The best is yet to come!"

The first promotional photo for the "Space Invader" album campaign from Frehley can be seen below.

The session, which took place on April 8 in New York City with photographer Jayme Thornton, saw Ace wearing something from the first KISS album photo session to make the occasion extra special.

Frehley's last album, "Anomaly", was made available as a 2-LP vinyl set featuring two new limited-edition colors on October 1, 2013 via Brookvale Records. Only 750 units of each color were manufactured.

Frehley told Billboard.com in a 2009 interview that he intended "Anomaly" to "kind of pick up where I left off with my first solo album" — 1978's "Ace Frehley".

"Prior to going into the studio, I listened to that first album, which everybody cites as their favorite Ace record," Frehley said. "I dissected it and tried to get into the same mind set this time around. I think I recaptured some of the musical textures and attitude and vibe that I had on that first record."

"Anomaly" was recorded at Schoolhouse Studios in New York and at Ace's home studio in Westchester, New York. 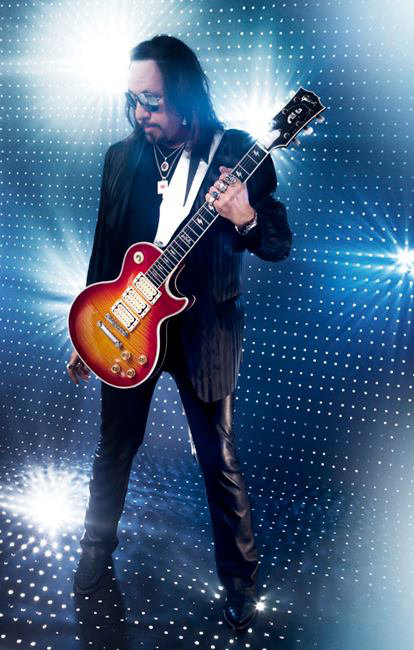