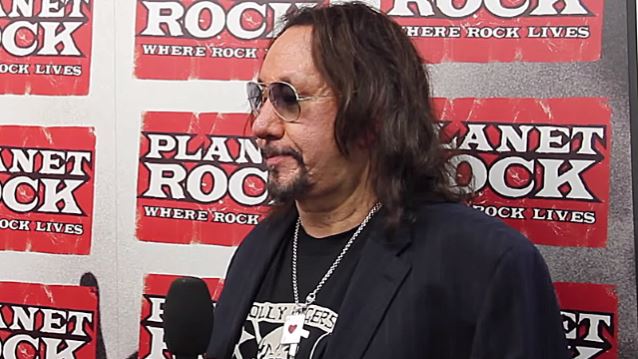 Planet Rock conducted an interview with original KISS guitarist Ace Frehley at the 2015 edition of the U.K.'s Download festival, which was held last weekend in Donington Park. You can now watch the chat below.

Asked what he is going to be working on for the remainder of the year, Ace said: "I'm working on a new covers and remix record for eOne Music, and in Europe, it's SPV. And after that, I've already started working on a new studio record. And between those two things, I'm touring, and I'm doing a cruise after the New Year to the Bahamas, I think — a classic rock cruise. So that's gonna be a lot of fun. That's a first for me."

Regarding which songs he is planning on recording for his covers album, Frehley said: "I'm trying to pick songs that, kind of, influenced me through my career. You know, groups and certain songs… I'm doing another [THE ROLLING] STONES song. That's no… I'm not a stranger to redoing STONES songs. But, yeah, I'm working on an ANIMALS song, and maybe a [Jimi] Hendrix song. And a couple of… I think I'm gonna be doing 'Parasite' and 'Cold Gin' — songs that I wrote that I didn't sing on the original KISS records. So that'll be a treat, too, for the fans."

"Space Invader", which was made available in Europe on August 18, 2014 (three days earlier in Germany and Scandinavia) through SPV/Steamhammer, included 11 brand new original songs as well as a cover of Steve Miller's "The Joker".