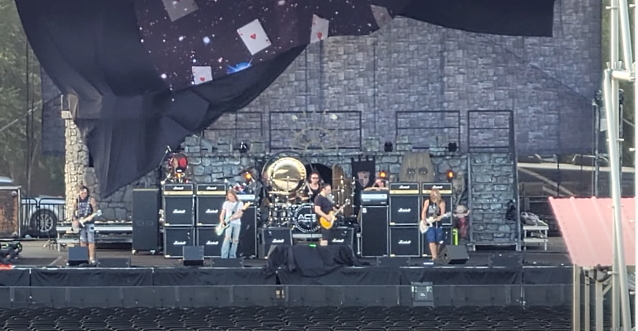 Ace Frehley's backing band paid tribute to Eddie Van Halen on the first anniversary of the iconic VAN HALEN guitarist's death by playing two VH songs — "Somebody Get Me A Doctor" and "Dance The Night Away" — during soundcheck in Raleigh, North Carolina. The October 6 concert at the Red Hat Amphitheater was part of Ace's U.S. tour as the support act for fellow legendary rocker Alice Cooper.

Last October, Frehley reacted to Eddie's death on social media, writing on his Instagram: "Eddie was a friend of mine...I'm very saddened by his passing away so young in life...my prayers and condolences go out to his family, friends & fans!...A great and innovative guitarist...God Bless Eddie...R.I.P."

Last December, Eddie's immediate cause of death was revealed to be a cerebrovascular event, such as a stroke. Pneumonia, the blood disorder myelodysplastic syndrome and lung cancer were also cited as underlying causes in his death certificate, which was obtained by TMZ. The certificate also listed a number of other "significant conditions" that contributed to Eddie's death, including squamous cell carcinoma (skin cancer) of the head and neck, and atrial fibrillation, a condition that causes irregular heartbeat and elevates stroke risk.