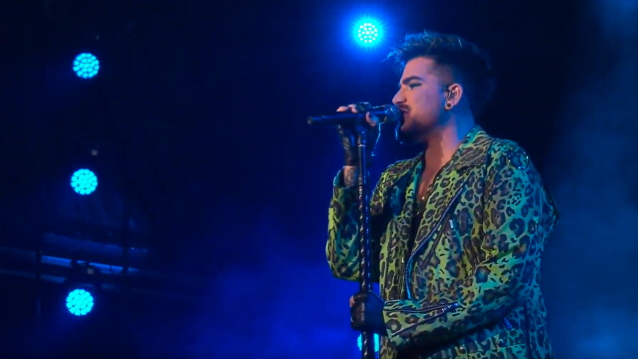 "American Idol" runner-up Adam Lambert, who has been fronting QUEEN on tour since 2012, spoke to the "Humans Of Music" podcast about the unenviable task of filling the void left by the late Freddie Mercury.

Lambert, drummer Roger Taylor and guitarist Brian May first shared the stage during "American Idol" in May 2009 for a performance of "We Are The Champions". They teamed up again in 2011 at the MTV European Music Awards in Belfast, Ireland for an electrifying eight-minute finale of "The Show Must Go On", "We Will Rock You" and "We Are The Champions" and in the summer of 2012, the singer performed a series of shows with QUEEN across Europe as well as dates in Russia, Ukraine and Poland. They have since completed a number of tours and performed at some of the biggest festivals in the world.

Speaking about the pressure of some of his first live performance with QUEEN, Lambert told host Rod Yates (hear audio below): "Once I got past the expectation of Freddie, 'cause, obviously, I was totally intimidated by that… It's still kind of, like, 'Woah.' It's hallowed ground. But I think now I know that over the last eight years, I've sort of earned my spot and I've won enough people over, so I don't have to worry about it anymore. I just go out there and do my thing. I work hard and I sing the shit out of the songs and celebrate him and talk about Freddie. It's very important to acknowledge him as much as we can. But, yeah, that's helped me a lot."

Lambert went on to say that May and Taylor made it easy for him to be himself and not worry too much about replicating Mercury's performances.

"On one hand, I'm singing great material that people love and know like the back of their hand," he said. "And if people know all the songs, that's half the job — that's half the battle. And as long as I stand up there and deliver the songs, I win. But then, of course, the flipside is, obviously, being compared to Freddie and kind of being in that shadow and winning over purists, which I fully understand. And making sure I don't imitate him, making sure I make it my own, I'm not too far from the original, and all that. So it's both."

All proceeds made from the song will go towards the COVID-19 Solidarity Response Fund for the World Health Organization.