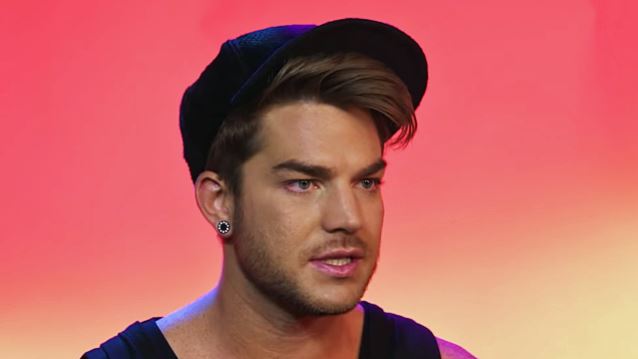 For the past few years, "American Idol" finalist Adam Lambert has been singing for QUEEN on their tours, filling in for his idol Freddie Mercury. In the Radio.com interview below, he talks about when he finally got comfortable with the role.

Said Adam: "It's interesting, though, because I've heard people say, 'Oh, you're the new lead singer for QUEEN.' And it's, like, well, essentially, yeah. But it's not a permanent position, I don't look at it as. It was billed as QUEEN + ADAM LAMBERT, 'cause I feel like it's a collaboration; it's a live collaboration. It's something that we decided to do for three months and… I guess over the course of five months… and we had a great time together. And the audiences ate it up, which was great. And we sold out, which was great. But it's a collaboration."

He continued: "The first time we went around and did this in Eastern Europe and the three shows we did in London, they went over well and we did them, but I don't think I was totally comfortable with the idea. I think I was still, really, in my head, kind of, intimidated by the whole concept of singing lead for this amazing band. The second time around, this world tour we just did, something had shifted. And I don't really know why or how, but something had shifted and I felt a lot more… I accepted the responsibility at that point, and it was more a I-can-do-this attitude than I ever had with it. So... confidence makes a big difference."

Lambert, May and drummer Roger Taylor first shared the stage during "American Idol" in May 2009 for a performance of "We Are The Champions". They teamed up again in 2011 at the MTV European Music Awards in Belfast, Ireland for an electrifying eight-minute finale of "The Show Must Go On", "We Will Rock You" and "We Are The Champions" and in the summer of 2012, Lambert performed a series of shows with QUEEN across Europe as well as dates in Russia, Ukraine and Poland. They also performed three sold-out gigs at London's Hammersmith Apollo.

QUEEN guitarist Brian May recently said that there are no plans at the moment for the band to record new music with Lambert.

Speaking to Gigwise at this past May's Ivor Novello Awards in London, England, QUEEN guitarist Brian May said that there are no plans at the moment for the band to record new music with Lambert. He said: "No, we're not doing that. Not at the moment anyway. We might do [at some point]. But, at the moment, we're watching with interest while Adam pursues his solo career, and it seems to be going very well. I mean, he's an amazing, amazing artist — there's no getting away from that — so it's very interesting to watch him develop. And I think we're conscious that he doesn't wnna be with us all the time, you know?! That would be so wrong, for us to just, sort of, envelop him and never let him go off and do anything else. It's very important that his own career is progressing now. And we're looking forward to being back together in September to do Rock In Rio [in Brazil], and some dates in Argentina and Venezuela, I believe."

After completing QUEEN's most recent European tour in January, May described Lambert as the only singer the band had found capable of filling the shoes of iconic frontman Freddie Mercury. "Adam is the first person we've encountered who can do all the QUEEN catalogue without blinking," said May. "He is a gift from God." Taylor echoed the guitarist's sentiments, adding: "[Adam's] incredibly musical, and we certainly take anything he says quite seriously."

Lambert released his third studio album, "The Original High", on June 16 through Warner Bros. Recorded in Stockholm, Sweden and Los Angeles, California with Max Martin and Shellback as executive producers, the CD displays a fresh sound for Lambert, and includes collaborations with Tove Lo and May.