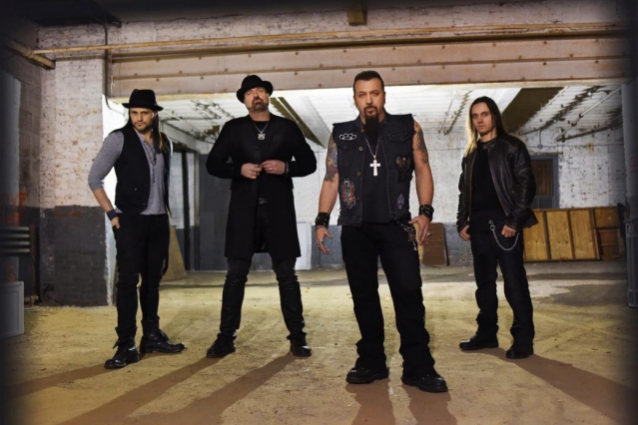 ADRENALINE MOB Guitarist Doesn't Know If Band Will Ever Come Back

Mike Orlando says that he doesn't know if ADRENALINE MOB will ever do anything again, nearly two years after the accident that resulted in the death of the band's bassist, David Zablidowsky.

The incident occurred in July 2017 when a tractor-trailer — dispatched by Largo, Florida company Twiss Transport Inc. — veered off Interstate 75 near Micanopy, Florida, crossed at least one full traffic lane before leaving the road, splitting the band's RV in half and causing it to become engulfed in flames.

Asked in a new interview with "BODS Mayhem Hour" if fans can expect to hear any fresh music from ADRENALINE MOB, Orlando, who was seriously injured in the accident, said (hear audio below): "I don't know. We've been through so much bad times and so much hurt, so much just pain. I mean, it's still ongoing. I'm going in, this Friday, for my fourth procedure on my neck. So it's still fresh. I've been battling the physical aspect of this for a year and a half now, with my problems and multiple procedures and stuff. So, it's tough, man. I just don't say anything. I just keep trying to move forward, and I'm happy to still be here and be breathing from that horrific accident. "

The guitarist continued: "I love ADRENALINE MOB. What can I say? It's my baby. I loved it. It's incredible music. Russell Allen is an incredible singer. And all the guys that we've had — the amazing Mike Portnoy, and all the guys in the band. It's been great, but then there's been so much bad. So it's tough to get over."

At the time of the accident, ADRENALINE MOB was touring in support of its third studio album, "We The People", which was released in June 2017 via Century Media. The follow-up to 2014's "Men Of Honor" was the first ADRENALINE MOB release to feature Zablidowsky and drummer Jordan Cannata.