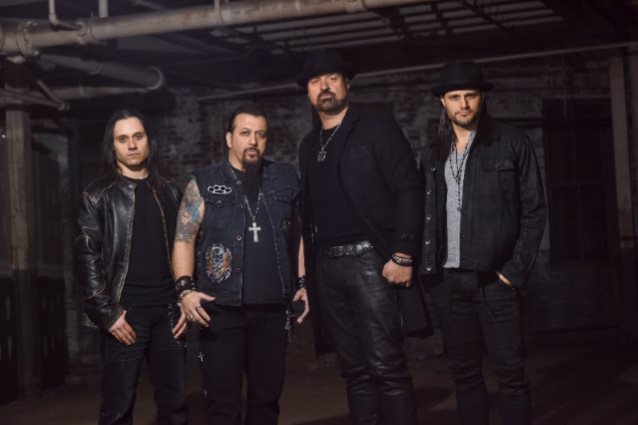 ADRENALINE MOB bassist David Zablidowsky died and six others were injured when a tractor-trailer veered off Interstate 75 near Micanopy and struck the group's RV that had pulled off the highway with a flat tire. Zablidowsky was pronounced dead at 12:42 p.m.

Out of the nine people who were in the vehicles, six were taken to area hospitals, and two declined medical treatment, according to Gainesville.com. Of the six injured, three were listed in critical condition and the other three in stable condition.

The media relations coordinator for UF Health Shands Hospital, where several of the injured were taken, told WUFT in an e-mail: "The UF Health emergency response mass casualty plan was activated today at approximately 1:15 p.m. due to a multivehicle accident on Interstate 75 in south Alachua County. Three patients arrived at UF Health Shands Hospital and are being cared for by UF Health faculty and staff."

ADRENALINE MOB's soundman, Robert Dressler, who was one of the people who had been riding in the RV, told Gainesville.com he heard a "boom" when the truck hit the RV.

State Theatre general manager Kendra Marolf told the Tampa Bay Times she got a call mid-afternoon alerting her that the band had been involved in an accident with injuries, some critical, and would not be able to make the show.

Zablidowsky joined ADRENALINE MOB earlier this year. Prior to hooking up with the group, he had toured with TRANS-SIBERIAN ORCHESTRA, JOAN JETT AND THE BLACKHEARTS, and Jeff Scott Soto.

TRANS-SIBERIAN ORCHESTRA released the following statement regarding Zablidowsky's death: "We are terribly saddened with the passing of our talented friend, TRANS-SIBERIAN ORCHESTRA, ADRENALINE MOB and ZO2 bass player, Dave Z (David Zablidowsky). Dave was so very special to our family and our thoughts and prayers go out to Dave's family, and all those affected by Friday's tragic accident."

TESTAMENT guitarist Alex Skolnick wrote about Zablidowsky: "I'm overseas, just now hearing the news of a horrific highway accident involving the band ADRENALINE MOB and their new bassist, a dear friend of mine, David Z — one of my favorite people to tour with (and many others will agree). In addition to being a great bassist and performer, he was a truly good soul who never had a bad word to say about anyone. Total sadness and disbelief. RIP my bro."

Jeff Scott Soto said: "There's not a whole lot to say yet too much I wanna say... The past seven hours have changed my life and perspective yet again... I lost my good buddy today, but more so the world lost one of the greatest humans on the planet. Please respect the privacy and respect of the family during this time. Big love and support to the MOB... Peace out for now!"

A Brooklyn, New York native raised in a family of musicians, David and his older brother Paulie formed the band ZO2, which gained notoriety in 2004 when they opened the forty-city, three-month-long KISS/POISON "Rock The Nation" U.S. tour.

Paulie Zablidowsky wrote on his Facebook page: "As you can all imagine, my family and I are devastated by the horrific news of David's passing. A piece of our hearts has been taken from us today and we are figuring out how to deal with this as a family. Please give us time and space to mourn and we will keep you posted when we can. Thank you all for your kind thoughts and prayers."

In addition to being a veteran live touring musician, David was also an accomplished studio session player. With a bachelor's degree in music from Brooklyn College, David played on numerous recordings, including those from legendary hard rock singer Joe Lynn Turner (RAINBOW, DEEP PURPLE) and Wind-Up artist SEVEN WISER.

ADRENALINE MOB was touring in support of its third studio album, "We The People", which was released on June 2 via Century Media. The follow-up to 2014's "Men Of Honor" was the first ADRENALINE MOB release to feature Zablidowsky and the band's new drummer Jordan Cannata.

As you can all imagine, my family and I are devastated by the horrific news of David's passing. A piece of our hearts...

We are terribly saddened with the passing of our talented friend, Trans-Siberian Orchestra, Adrenaline Mob and ZO2 bass...

There's not a whole lot to say yet too much I wanna say...the past 7 hours have changed my life and perspective yet...

Here we go again, me having to get the huge weight of emotions off my chest by blogging it…one never knows how to say...

4:30am here in Germany & I still can't process this...@zo2david was such a sweet soul & great talent. I'm heartbroken 😥 #RIPDavidZpic.twitter.com/OmrbCixINI

So sad to hear about passing of my bro @zo2david. Dave was a great guy w an infectious laugh & an awesome musician https://t.co/P4ozJKZfLJ

So sad to learn about the passing of @zo2david - I had an opportunity to work with him years ago. My deepest condolences to the family!

The mind boggles. I just read the horrific news that my friend David Z was killed today. David and his brother Paulie...

Crash on I-75 near Micanopy. FHP says there were three vehicles involved. One fatality confirmed at this point. pic.twitter.com/UMUaf8AtVS