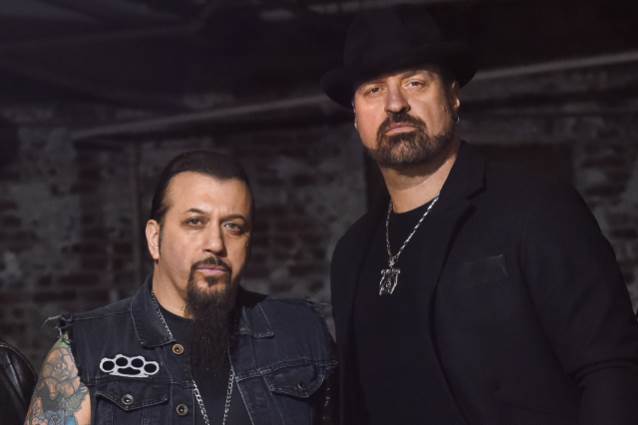 ADRENALINE MOB singer Russell Allen and guitarist Mike Orlando have paid tribute to their fallen bassist and tour manager on the first anniversary of the crash that resulted in their deaths.

The accident occurred on July 14, 2017 when a tractor-trailer — dispatched by Largo, Florida company Twiss Transport Inc. — veered off Interstate 75 near Micanopy, Florida, crossed at least one full traffic lane before leaving the road, splitting the band's RV in half and causing it to become engulfed in flames.

Allen, who was seriously injured in the crash, took to his Facebook page on Saturday to honor Zablidowsky and Rains, writing: "On this day one year ago, we lost two wonderful souls. A loss felt by so many friends, families, fellow musicians and fans from around the world.

"Following your dreams is a difficult road and a dangerous one at times. I had the privilege to share that experience with Dave and Janet, and through the good and bad times, they were always kind, gracious, and caring.

"Some people think they have what it takes to get out on the road and tour… only to realize it's a lot of blood, sweat and tears. It's not for the faint of heart.

"Dave and Janet were passionate artists dedicated to their craft; they worked hard and loved the journey. I miss them tremendously.

"For us survivors, it's been hell. I've been struggling with their loss for a year now and will continue to forever.

"My thoughts and prayers are with the families of these amazing people who were taken to soon. RIP David Z and Janet Rains."

Orlando, who was also seriously injured in the accident, posted his own tribute to Zablidowsky and Rains, writing on Facebook: "One year ago to this day, life as I knew it was so tragically and horrifically changed forever. I still feel completely shattered, completely broken and speechless to this day.

"For the rest of my life and the other survivors as well, this will be one of the hardest days ever to get through, even though every day still is and always will be. We were all severely injured and still to this day are recovering and two absolutely beautiful people were taken from us and I'll never understand why such a senseless horrific tragedy had to happen the way it did.

"We, the survivors, are forever mentally, physically and emotionally destroyed from this, and, honestly, I will never be the same again.

"RIP David Z and Janet Rains. May you both fly free with the angels above us.

"Dave, your infectious laughter and smile was so beautiful and will be missed by so many.

"Janet, you were an angel and such a dear kind beautiful and caring soul... I miss you so very much, words cannot describe.

"Be grateful every minute we are here, my friends, and tell the ones you love how much you love them all the time, because, unfortunately, in the blink of an eye, that one split second, they could be gone.

"Thank you so much to all my wonderful friends for all the love and support through this nightmare...

"To Dana, my love, and my entire family, thank you from the bottom of my broken heart for helping me through this nightmare day in and day out."

Last November, Rains's family filed a federal wrongful death lawsuit against Disney and others alleging the truck driver hauling oil negligently crashed into ADRENALINE MOB's tour vehicle, resulting in her death. The lawsuit alleged that Disney Worldwide Services arranged for a shipment of oil from Cargill, Inc., in Gainesville, Georgia, to be delivered to Lake Buena Vista, Florida. The lawsuit also alleged that Disney "improperly" subcontracted the transportation to Bulova Technologies Group, Inc.'s subsidiary Twiss Transport, whose driver was involved in the crash. The driver reportedly had a history of traffic violations, including for speeding and following too closely.

ADRENALINE MOB was touring in support of its third studio album, "We The People", which was released in June 2017 via Century Media. The follow-up to 2014's "Men Of Honor" was the first ADRENALINE MOB release to feature Zablidowsky and drummer Jordan Cannata.

On this day one year ago we lost two wonderful souls. A loss felt by so many friends, families, fellow musicians and...

One year ago to this day life as I knew it was so tragically & horrifically changed forever. I still feel completely...