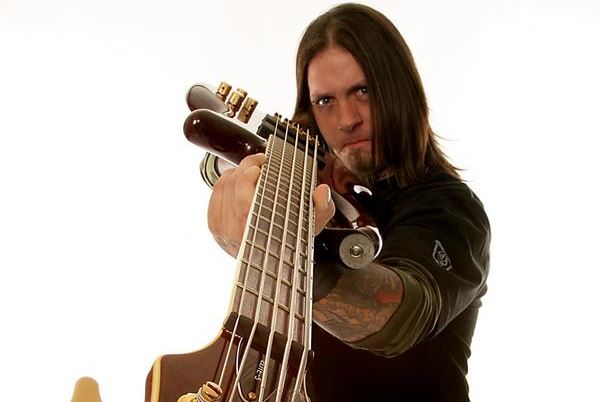 Moyer released a statement earlier in the month claiming that ADRENALINE MOB had "known for weeks" that he would not be joining them on the road for the band's upcoming tour and that he was "confused" by the band's assertion that they were "totally shocked" by his announcement that he would sit out the trek.

Moyer has been standing in for Rudy Sarzo with Geoff Tate's QUEENSRŸCHE whenever Rudy has been unable to make QUEENSRŸCHE dates to his commitments to other projects.

The bassist explained that the reason he is sitting out the ADRENALINE MOB shows "has nothing to do with DISTURBED or Geoff Tate's OPERATION: MINDCRIME." He added: "I'm finishing two production projects with the bands WRETCHED SKY and FAVOR THE FALL. I'm also producing the bands WARRIOR SPIRIT in August, ASCENDING FROM ASHES in September and 1 ECHO 1 in October. I will also be overseeing big plans with my rock school John Moyer's Natural Ear Music School in the fall."

ADRENALINE MOB's second full-length album, "Men Of Honor", sold around 3,600 copies in the United States in its first week of release to land at position No. 99 on The Billboard 200 chart.

"Men Of Honor" was released on February 18 in North America and February 24 internationally via Century Media Records. The CD features 11 new original songs produced by Allen and Orlando.