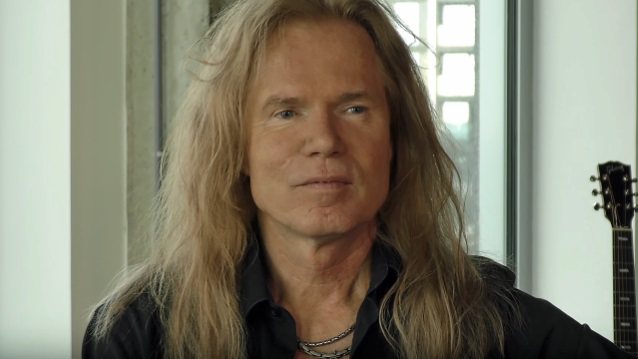 ADRIAN VANDENBERG: How I Introduced ANGUS YOUNG To His Wife

Adrian Vandenberg has recalled how he introduced Angus Young to the woman that later became the AC/DC guitarist's wife of 38 years, Ellen.

Speaking on the "White Line Fever"podcast, the former WHITESNAKE guitarist said: "What you probably don't know this is I brought Angus and his wife together and they're still married.

"Ellen, Angus's wife, was a friend of mine when I was studying at university in the Dutch city of Arnhem. We always saw each other at rock shows and in bars," he continued.

"I was 21 or 22 and I had a rock band put together called TEASER and we had one album," Adrian said. "We were invited to be support act to AC/DC on a couple of shows and one of them was close to the town I was studying in and where Ellen also lived. She said, 'Adrian, can you put me on the guest list?' I said, 'Well, I'm going to try, but we are guests of AC/DC. I'm not sure we have the option to invite guests.

"But it worked. I put her on the guest list with two friends of hers. Imagine this: Ellen is almost as tall as I am and I'm six-foot-seven. I think Ellen is probably six-foot-four or something and we all know Angus is not the tallest guy.

"I told their bodyguard there's going to be three blond, very tall chicks coming up in a little bit backstage. Wouldn't it be funny to introduce them to the guys in AC/DC, you know, because they were all pretty short. He said, 'Yeah!' So he did, and Ellen called me up a couple of weeks later and said, 'Guess where I am?' She was in Paris or something, and a year later, they were married."

Vandenberg and his VANDENBERG'S MOONKINGS released their latest album, "MK II", in November via Mascot Records.

Angus's brother Malcolm, who co-founded AC/DC with him in 1973, died in November at the age of 64 after suffering from dementia and failing health for several years.