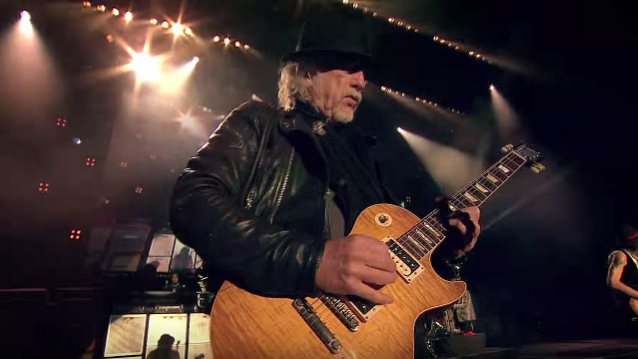 Brad Whitford has revealed to Billboard Argentina that AEROSMITH recently entered a London, England studio to lay down the first new material since 2012's "Music From Another Dimension!" album. "We actually did some recording while we were touring Europe, and we started recording a new song," the guitarist said.

Whitford added that the track AEROSMITH is working on "is a musical idea of [fellow AEROSMITH guitarist] Joe Perry's. We're doing it very much like we did songs back when we started out," he said. "It's very rock 'n' roll."

Explaining that "you don't have to record a whole CD anymore," Whitford expressed his hope that AEROSMITH "can put out this one song or two or three."

He said: "The music business has changed so much since we started. You have to do things really differently. We could just release one song and make it available for download. It is a different world in the music business."

"Music From Another Dimension!" was released when AEROSMITH's label, Columbia Records, was reportedly going through a leadership change, and it ended up becoming a commercial disappointment.

The lackluster response to the disc later caused two bandmembers — Perry and drummer Joey Kramer — to question whether there's any point in AEROSMITH making future albums.