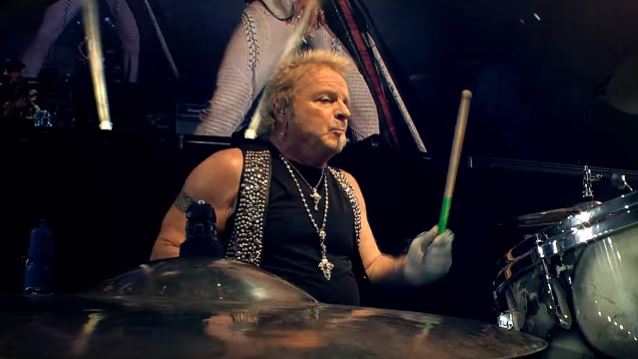 AEROSMITH's JOEY KRAMER: 'As Far As I Know, There Is No Farewell Tour'

AEROSMITH drummer Joey Kramer has told CultureMap that his bandmate Steven Tyler's announcement on "The Howard Stern Show" that AEROSMITH would be embarking on a farewell tour in 2017 came as news to him.

"As far as I know, there is no farewell tour," Kramer said.

Asked why Tyler told Stern there would be a final AEROSMITH tour, Kramer responded: "Because it was something we were talking about, and he has a habit of projecting on things that haven't been completed yet."

Kramer's comments echo those made by AEROSMITH guitarist Joe Perry, who told Rolling Stone earlier in the year: "A farewell tour is something we've talked about doing for years, let's say roughly in the last five years. It's just something the band's talked about at various times. At this point, the five of us have never sat down and said, 'It's time to do it.' So 'considering' is an appropriate word for that statement. A farewell tour is definitely not confirmed."

Perry added that although AEROSMITH splitting isn't something he's looking forward to, he feels that the band is nearing the end. "It's getting to be about that time," he said.

The guitarist told The Pulse Of Radio that ultimately, the thrill of what AEROSMITH accomplished musically trumps all the problems that the band has endured due to drugs, women, management and ego issues. "It's really the five of us, y'know, as a band," he said. "And it's still exciting to walk out onstage with these guys. And that, I think, is the glue that keeps us coming back. Sometimes I ask that question myself, y'know, 'Why am I still doin' it?' Well, when I walk out onstage in Moscow and everybody out there is singing words to songs that we wrote in the basement, or, y'know, in some studio somewhere. It's nothin' short of a miracle, y'know? And so we kind of have a lot of respect for that."