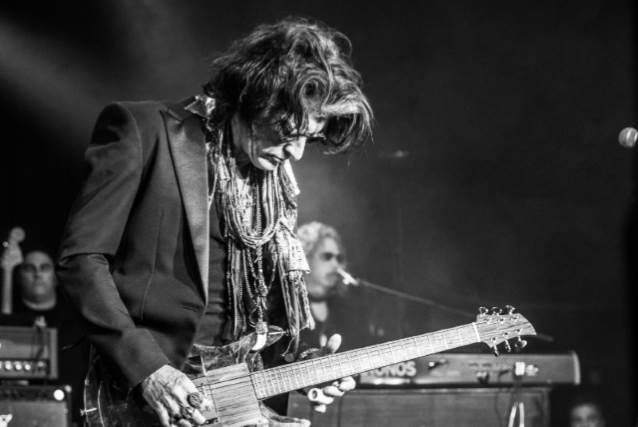 Joe Perry — legendary guitarist, co-founding member, principal songwriter and co-producer of AEROSMITH — has just released the new video for "Aye, Aye, Aye", the first single from his "Sweetzerland Manifesto" album. The clip can be viewed below.

"I had just finished writing my autobiography 'Rocks' with David Ritz so we'd been based in L.A.," Joe says about how "Sweetzerland Manifesto" came together. "My friend and future bandmate Johnny [Depp] offered the use of his studio to record my new solo record. Later that week, I went to his studio to talk about the record and the possibly about it being an instrumental CD. Ironically, that night we recorded 'Eve Of Destruction' with Johnny on drums. Even though it was big hit in the sixties, I felt with everything going on in the world today that this song was more than relevant than ever especially since the Atomic Clock had just been moved even closer to midnight."

"'Aye, Aye, Aye' was the only song written from the ground up for this CD," Joe continues. "All the other tracks I had written before the vocalists heard them. Robin had a chorus that he sang to me over the phone and he said, 'This sounds like a riff that could be right up your alley.' When Robin walked into the studio singing 'Aye, Aye, Aye,' I said, 'What is a good key for you?' He said, 'The Aye, Aye, Aye key.' [Laughs] By that night, we had a demo of the song finished. Later I found out it was inspired by my love for my custom Gibson Billie guitar which has my wife's picture on it (painted by John Douglas).

"The only requirement or pressure behind this album was all the songs had to be fun to play live," Perry says. "And after having the chance to perform 'Aye, Aye, Aye' with Robin live, I have to say it hits the mark. Little did I know it would be one of my favorite songs on the CD."

Released earlier this year on Perry's own Roman Records imprint (distributed worldwide by AMPED Distribution), "Sweetzerland Manifesto" marks Joe's sixth solo album and is comprised of 10 new tracks. They were all written or co-written by Joe (many with the album's guest vocalists), except for a cover of "Eve Of Destruction", with Joe on lead vocals and Depp on drums. The album features guest appearances from a long list of Joe's friends, colleagues and rock and roll icons. Highlights include three collaborations with David Johansen, who sings "I Wanna Roll", "Haberdasher Blues" and "I'm Going Crazy", plus as many co-writes with Terry Reid, whose lead vocals light up "I'll Do Happiness" (with Zak Starkey on drums), "Sick & Tired" and "Won't Let Me Go".