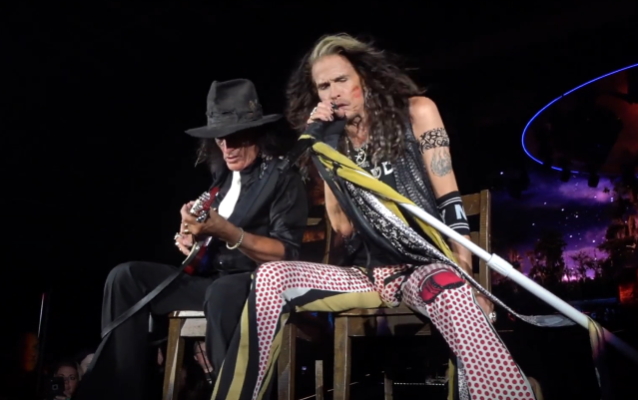 In a new interview with WMMR's Brent Porche, Joe Perry spoke about AEROSMITH's touring plans to celebrate the band's 50th anniversary. The guitarist said (as transcribed by BLABBERMOUTH.NET): "I think that the Fenway show [in Boston in September], being able to pick a date and go, 'That's when we wanna play there,' it's kind of tough. But coincidentally, it's a really good time to kind of kick it off. And then, I don't know; we're not quite sure what we're gonna do. I would like to play some of the places we haven't played in 30 years. It's really about scheduling and trying to mount a tour, and then we'll see what we can do with it. It's kind of like with Fenway… That's gonna be the kick-off, I think."

Perry went on to reveal that AEROSMITH is working on a "box set that kind of hits on every decade and some videos to go along with it." He explained: "In the first, say, 30 years of our career, finding video is really hard. With everybody having a camera [now], the show you're doing is literally online within [minutes]; some of it's streamed. So the [recent] shows are up there; finding video from the last 20 years, it's not a problem. It's finding the stuff that you like.

"As it turns out, we actually shot a bunch of songs because the record companies would use them to promote… When they would have these get-togethers every years, all the record companies would show what they have coming out and the latest this and the latest that, so they would shoot promotional videos," he continued. "So they weren't quite what we know as the MTV-style videos. So we're digging down and finding some of that stuff. And then there's some people that actually had some video from… 'Cause back then, it was a big camera and they had cartridges that lasted three minutes, so to get a whole song on one, you had to have at least two cameras going.

"I actually started carrying a camera with me, and when we played the Silverdome in Detroit [in 1976] — I think we were the second band to play there and the first band to fill it; it was, like, 80,000 seats. It was wild… Anyway, I remember sending somebody up with my camera — way up into the bleachers or whatever — and by the time they got it focused and kind of brought the lens close enough, you couldn't even tell who was playing. Most cameras didn't have sound either, but this one did. And it was kind of rough version of whatever we were playing… I mean, stuff keeps popping up. Fans will say 'I've got a piece of this' or 'I took some video of that', but it's bits and pieces. Most of it are still pictures. We're constantly finding the stuff."

Two months ago, AEROSMITH announced that singer Steven Tyler had entered a treatment program following a recent relapse, prompting the band to put their Las Vegas residency on a temporary hold.

Last month, AEROSMITH drummer Joey Kramer's wife Linda Gail Kramer died at the age of 55. No cause of death has been revealed.