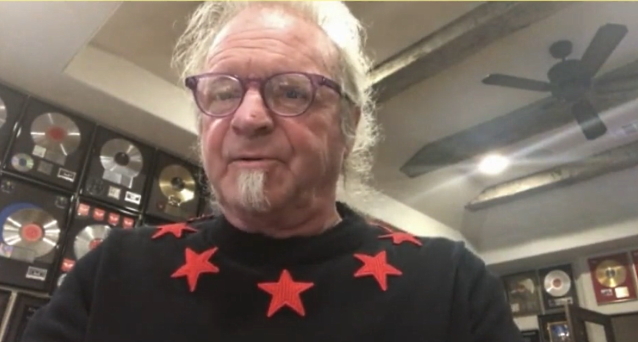 AEROSMITH's JOEY KRAMER Has No Interest In Making Solo Album

On February 10, AEROSMITH drummer Joey Kramer spoke with Darren Paltrowitz, host of the "Paltrocast With Darren Paltrowitz", about his upcoming Rock 'N' Roll Fantasy Camp masterclass, his memoir "Hit Hard: A Story Of Hitting Rock Bottom At The Top", life during COVID-19, living in Texas, proud accomplishments, his coffee company and more.

Asked if fans can ever expect to see a Joey Kramer solo album, the drummer replied: "This might really surprise you, but I haven't really questioned it seriously at this point. But I don't know that I really have a desire in me to do a solo album. There's too many other things that I would like to get involved with, in terms of helping people and just being a positive influence on Lord knows what we need today. The way the world is, I feel for us all, and it's tragic. I can't even watch the news anymore. We won't even go there, 'cause that's another conversation."

He continued: "There are too many other things, I think, that I would rather involved in than more music. I don't feel as though I have anything to prove to anyone other than myself. And as far as doing things, I just really enjoy being involved with people and helping out and doing what I can do and bringing to the table what I can. I don't know, really, specifically, what that may be, but when you say 'one day at a time,' that's how I try and live my life — one day at a time. I have been in recovery for many, many years, and that's how I like to live my life. And that's enough of a challenge in itself to keep me going."

A year ago, Kramer rejoined his AEROSMITH bandmates on stage during the group's residency in Las Vegas. A month earlier, he sued the rest of AEROSMITH in a bid to perform with them at two Grammy-related events. But a Massachusetts judge eventually ruled against him and the group played without Kramer.

In his January 2020 16-page complaint filed in Massachusetts state court, Kramer said the disability he suffered two years ago was minor, and insisted he was ready to return to the group's "lucrative" Las Vegas residency at the MGM Resorts a few months later, as well as its slate of "50th anniversary activities."

Steven Tyler, Joe Perry, Tom Hamilton and Brad Whitford later responded to Kramer's suit in a statement to People, saying Joey "has not been emotionally and physically able to perform with the band, by his own admission, for the last 6 months. We have missed him and have encouraged him to rejoin us to play many times but apparently he has not felt ready to do so. Joey has now waited until the last moment to accept our invitation, when we unfortunately have no time for necessary rehearsals during Grammys week. We would be doing a disservice to him, to ourselves and to our fans to have him play without adequate time to prepare and rehearse."

In a statement at the time, Kramer said he was "extremely disappointed" with the judge's ruling.

"I knew filing a lawsuit was a bit of an uphill battle," the drummer said. "I can hold my head high knowing that I did the right thing — to fight for my right to celebrate the band's success that I have dedicated the better part of my life to helping build."