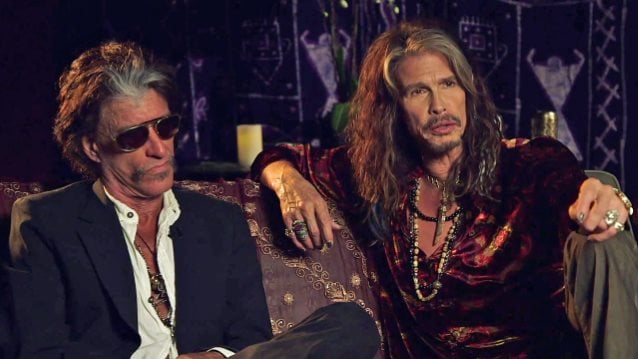 AEROSMITH's Joe Perry and Steven Tyler became same-day grandfathers on Wednesday, May 10. According to an announcement on AEROSMITH's Facebook page, the co-founders of the legendary Massachusetts hard rock band both welcomed new family members yesterday, with Tyler celebrating the birth of a grandson and Perry adding a granddaughter.

"Congrats to Steven Tyler and Joe Perry on the birth of their new grandchildren. Both born today!" the post reads. "How cool is that! The newest member of the Tyler family is a beautiful little boy, 7 lbs 11 oz born at 5:45 am. The newest member of the Perry family is a beautiful little girl, 6 lbs 9 oz born at 2:11 pm. Let's give them a huge #BlueArmy welcome."

Perry recently said that AEROSMITH pushed back a proposed North American tour for later this fall so that they can record a new album. The band heads out later this month on a prolonged string of dates dubbed their "Aero-Vederci Baby!" tour.

Perry spoke about the band putting future shows on ice to hit the studio before the end of the year, telling AZcentral.com, "We postponed the American tour we were supposed to do this fall. And we're gonna go out and tour until, you know, we're done. And we're gonna try and hit every place we've ever played and never played. There's always new places to go. New countries. I'd like to play China and the Far East. There's a lot of places that are off the beaten path. Is this the last tour? Well, I don't know. I don't think so."

AEROSMITH's most recent album, "Music From Another Dimension!", was released in November 2012 and peaked at No. 5 on the Billboard 200 chart. Perry maintains that the strength of any album begins and ends with the quality of the songwriting. "We've made records that have taken two years and cost millions of dollars," he said. "We made records in the early days that cost next to nothing. And the correlation between the two is never, 'A great record costs a lot of money, or a shitty record doesn't cost much.' One doesn't have anything to do with the other."