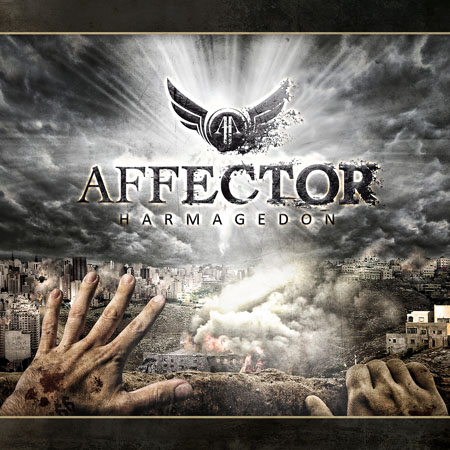 AFFECTOR — the highly skilled, new international band consisting of German guitar-player Daniel Fries, Dutch drummer Collin Leijenaar (NEAL MORSE, DILEMMA) as well bass player Mike LePond (SYMPHONY X) and vocalist Ted Leonard (SPOCK'S BEARD, ENCHANT, THOUGHT CHAMBER),both from the United States — has been preparing for the release of its debut album, "Harmagedon", that will be out on May 22 (North America, May 21 Europe) via InsideOut Music. A first listen of the elaborate, atmospheric songs is now available with the release of a five-minute online album teaser including excepts from various songs off "Harmagedon". Check it out below.

Commented Leijenaar: "With this teaser we hope to give the listener a bit of an idea what 'Harmagedon' sounds like — but since these are only small excerpts of an album that contains about 65 minutes of music, there is much more music to explore, so the best way to really experience it, is to buy it."

He added, "The album cover has been made by designer Daniel Latsch. After he heard parts of the demos when we were writing the album and we told him our story concept, he made this beautiful artwork. We are very proud of it. It really adds something to the complete package. Especially with the vinyl version; one of the benefits of being able to release our album on vinyl also — the artwork is just stunning!"

Citing broad musical influences and diverse inspirations between prog and classic as well as modern rock acts, AFFECTOR is like an open marriage between progressive rock/metal and orchestral minimalism, destined to appeal to everyone into bands ranging from DREAM THEATER, A.C.T., SYMPHONY X, DARKWATER to QUEEN or RUSH.