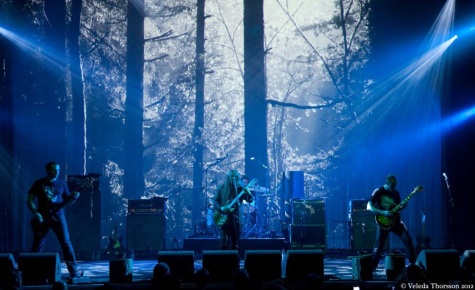 Portland musical enigmas AGALLOCH have announced a month-long bout of live performances this summer. Slated to commence with a hometown show July 11, the tour will include a nightly rotating set list featuring both new and early material with stage times anticipated to be between 90 and 120 minutes. The band will be joined by TAURUS featuring Stevie Floyd of DARK CASTLE and Ashley Spungin (formerly of PURPLE RHINESTONE EAGLE) as well as various local openers throughout the journey, all hand-selected by members of AGALLOCH.

Comments the band in a collective statement: "We are excited by TAURUS' experimental and challenging music and feel they are a perfect fit for us. We have carefully selected local openers whose music fits the environment of an AGALLOCH show. Where there are no openers selected, we will play nearly 120 minutes. We are all personal fans of the openers and encourage everyone to show up early to see them."

This tour will also mark the release of AGALLOCH's recently recorded EP "Faustian Echoes", a mammoth twenty-minute epic released through the band's own imprint, Dammerung Arts. This EP was recorded at Jackpot Studio in Portland, Oregon with acclaimed engineer Billy Anderson (MELVINS, SLEEP, NEUROSIS) at the helm. It was mixed by Anderson and mastered by Justin Weis (LUDICRA, HAMMERS OF MISFORTUNE) at Trakworx in San Francisco.